Nothing motivates me to clean and organize like needing to avoid making a bunch of cards for Christmas presents.

Here are the before pictures. So, so sad. 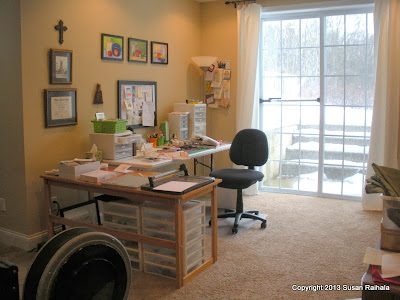 Yes. It was snowing when I got a wild hair to clean and organize my craft nook. That's the flywheel to my rowing machine in the foreground. I've actually been using that thing lately. It feels good.

But back to the mess. 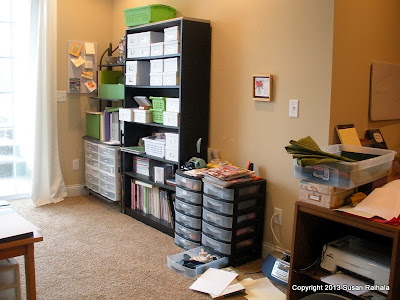 Leaving my drawers open and stuff on the floor is dangerous. Daisy ate an entire roll of hot pink Doodlebug baker's twine one day, filched shamelessly from an open drawer. It's unlikely she'd try to chew my border punches (they're in the open drawer in the picture), but all that nice cotton paper on the floor beside the printer cabinet is vulnerable. 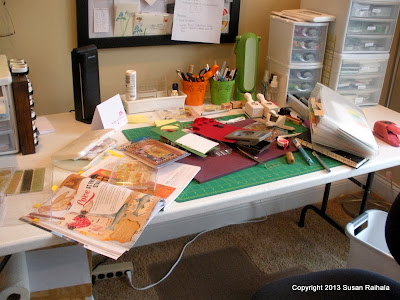 Here's my desk. Not the worst it's ever been but kinda crazy.

Now, here are the after pictures.


It's amazing how the green tablecloth improves the space. I'd taken it off to wash it and really missed how it pretties up the space.  I replaced cards on my inspiration boards with birthday cards and left room for the lovely Christmas cards I'm receiving. 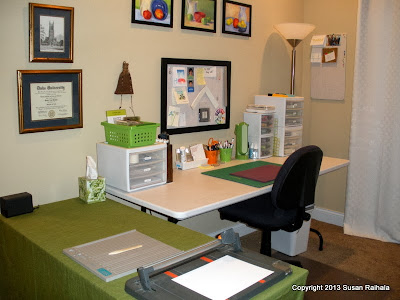 The left side of my nook is the work station. The L shape of the two tables works great for me. Everything is convenient, although I do still have to move around, stand up, bend over, etc. Striking a balance between convenience and the need to move was much easier than I expected when I first organized this space, and it's worked out well for the long term. 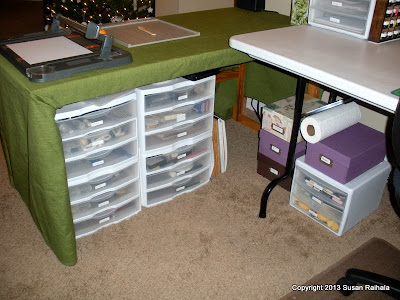 These drawers house embellishments (organized by color), and the photo boxes hold various cards...OWH stash for future shipments, Thanksgiving Crusade, etc....as well as reinkers. The tiny three-drawer unit holds markers, sponges and other stamping accessories that I don't use all that often but like to have close by. 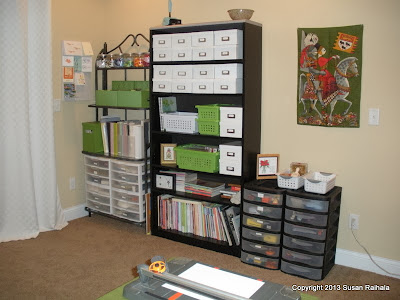 The right side of the nook is storage space. I keep my card stock over here so I do have to move around a bit on a regular basis. The white photo boxes house mostly wood-mounted stamps by theme. The green and white baskets allow me to organize larger projects, store cards that haven't been photographed yet, and keep things generally contained. 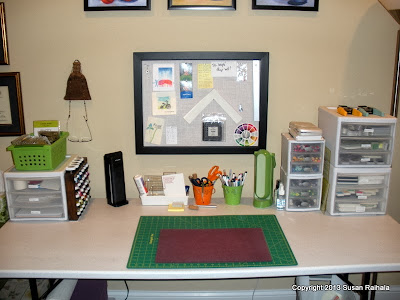 I wish my desk looked this clean right now, but alas, it's a mess again. 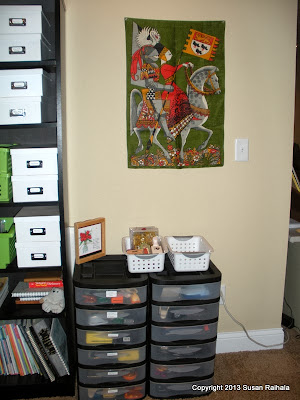 The tea towel has a story behind it. If you're not interested, simply scroll down to see today's card.

In the early 1990's, when George was stationed at Wurtsmith AFB in Michigan, my friend Wendy was pregnant and due to have her first baby. She went into labor the day before her parents arrived, so I drove to Saginaw to pick them up at the airport and drive them the two hours north to Wurtsmith.

Wendy's parents, Don and Pam, were cool. They were theater people. Both acted, and Don taught theater at university. They had stories--funny, strange stories--and totally related to my fascination (not shared by George) with Shakespeare. The night Wendy was still in the hospital, they came to my place and watched Kenneth Branagh's Henry V. We discussed it afterwards. Delightful!

When they had returned home, they sent me a box full of all sorts of goodness, including this tea towel of the Wife of Bath from Chaucer's Canterbury Tales. They'd picked it up in their travels and thought I would appreciate it. Well, duh. A few years later, I wrote my master's thesis on the Wife and her tale.

So now she resides on the wall of my craft nook, a reminder of lovely people as well as my former life as an English nerd. She makes me smile.

Wendy's parents continue to send us Christmas cards...long after Wendy quit. Early this year, I received a lovely letter from Pam telling me that Don had passed away. Pam's Christmas card and letter were among the first I received this year, and I'm so glad she's continuing the tradition.

How wonderful that we've stayed in touch for over twenty years via Christmas cards. Whenever you think about cutting someone off your Christmas card list, remember me and Don and Pam. Those long-distance relationships are precious, no matter how awkward they are to maintain. They are worth the effort.

And now let's shift gears and once again take a look at a Valentine's Day card for the troops. I'll be stuffing envelopes and packing cards for shipping to Sandy on Monday. 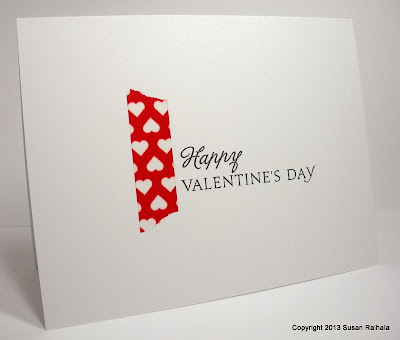 Yep. That's washi tape. I'm giving that cool product another try. Just bought six rolls at Office Depot. Maybe this time, I'll figure it out. If not, expect a give-away sometime in the future....
Posted by Susan Raihala at 5:39 PM