This week's One-Layer Wednesday Challenge is to make a one-layer card using MORE THAN FIVE circles on your card. Now's your chance to give those circle sets and polka-dot backgrounds a workout.

Using five or more circles on a card isn't that challenging, so the real challenge here is that you are NOT allowed to pop punched or die-cut circles on your one-layer card...that's adding a layer!!! Of course you CAN punch/die-cut a circle out of the front of your card. That's not adding a layer. 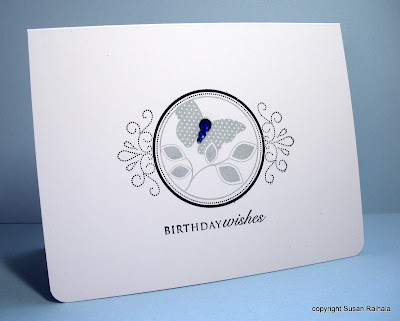 For my card, I used PTI's Round and Round set, an anniversary set that I don't use nearly enough. The circle frame has three nested circles PLUS all the dots in the decoration. The image has a polka-dotted butterfly, and I added three round rhinestones for a pop of color and more circles!
OLW78 Rules

2. Use at least FIVE circles on your card. If you feel so inclined, one of them can be the card base itself, but do NOT use punched or die cut circles!

3. Upload your card somewhere on the internet and link back to it here via the InLinkz button on the sidebar.

4. The most important rule of all is to HAVE FUN!!!