So I've been working my way through a new Hero Arts clear set called From the Vault Bugs. It's made up of classic Hero Arts stamps. Yesterday's dragonflies are from the set as well. This, however, is my favorite card of the batch. It's based on THIS LOVELY PIN. 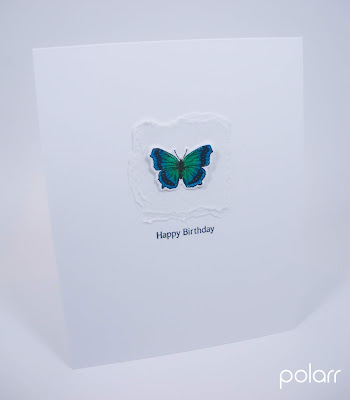 I colored the butterfly with Prismacolor pencils, which haven't seen use in a very, very long time. (I tried using them again today and flopped spectacularly!) The peacock shades of blue and green are gorgeous and make me very, very happy. I hope they make you happy, too.

The square mat is Hero Arts handmade paper, which I'm almost out of. A shopping order is in order, if you know what I mean. 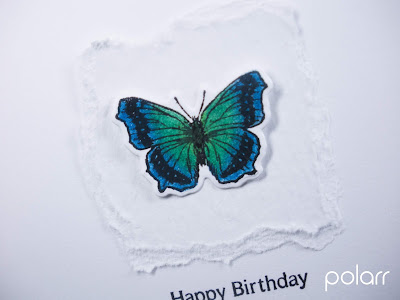 I need more Thin 3D Foam Squares from Scrapbook Adhesives, too. Those are my latest love. This card didn't use them, but both cards I made today do. They give just the right amount of pop without so much thickness that you feel the need to add extra postage.

So what have you ordered lately that you love? Maybe something needs to jump into my cart before checkout!

I had so much fun today stamping and less fun trying to find a free photo editing app that would be easy to use and make my white cards look white. Alas, I've had a hard time finding some of the programs you recommended. Let's see how successful I was with a highly rated app in the app store. 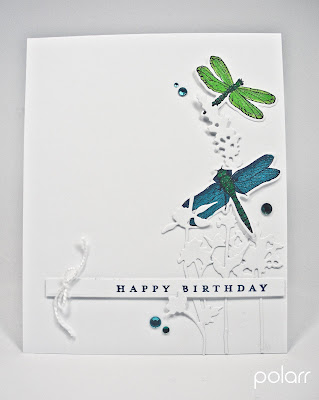 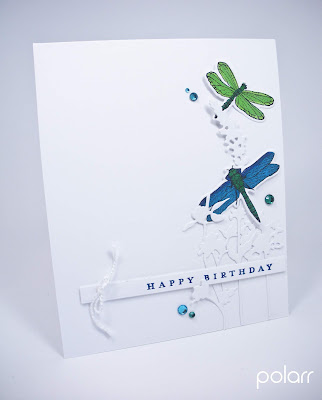 That's better. I'll get the hang of it.

I'm not sure how to put my name and copyright information on the photo and take off the app name. I'll figure it out eventually. Please don't steal my images in the meantime.

Regardless of the app woes, I love this card. I used Tim Holtz dies for the white foliage and a Hero Arts stamp set with dies for the dragonflies. They are colored with Arteza brush markers for really vivid color and then brushed with clear Wink of Stella. 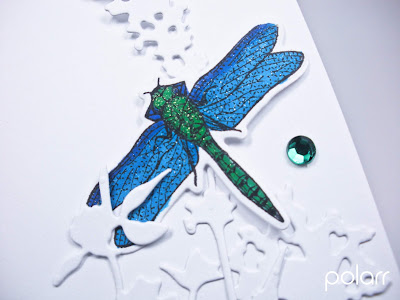 The card was loosely inspired by THIS LOVELY PIN but went veering off in another direction. The echo of the original is evident, though.

So much fun to make!

PS If you are interested in my post on the issue of homosexuality and the United Methodist Church, I finally wrote the thing. It's been several years percolating. It might piss some people off, but then, I'm pretty pissed off at what my church is doing.

Make-Believe Mushrooms and Asking for Advice

I wanted to play around with the mushroom dies I bought months ago, and here's the result.  I intensely dislike the photo, which looks so gray and dreary in the full card picture. I had to buy a new computer (the last one gave me 7 good years, I think) and don't have Picasa photo-editing on the new one yet. I can't brighten the picture further without it looking incredibly artificial.

Picasa is no longer available, so clearly I'm going to have to do something else. Recommendations, please? 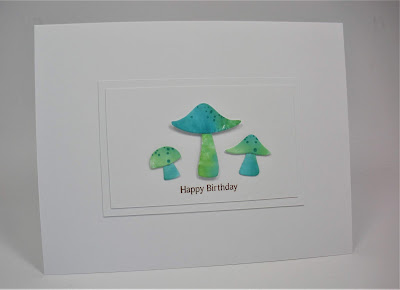 These 'shrooms bear absolutely no resemblance to any naturally-grown fungi. But they sure are colorful and cute! I scribbled Arteza brush markers on an acrylic block, spritzed with water, and stamped the paper. A little heat from a heat gun dried the wash quickly, and then I cut the paper with the dies. I added the dots using my little StampinUp speckled background stamp. The sentiment is from Papertrey's Sign Language set. 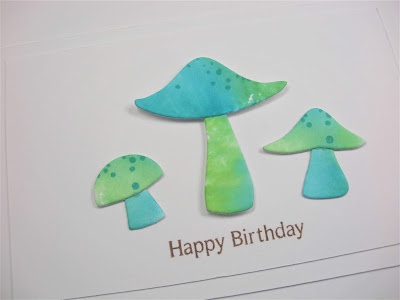 It's been a crazy week with planning and taxes and such, but I hope I can stamp a little more this week.

If you're a fan of golden retrievers, you might want to read (if you haven't already) the book by Trixie Koontz called Life Is Good. Trixie was the golden retriever of author Dean Koontz, and she authored two books (one from beyond the grave titled Bliss to You...good, but not as good as Life Is Good). Profits from the books go to the service dog organization that Trixie failed out of.

Dean Koontz wrote a book about Trixie that ends heart-wrenchingly with Trixie's death (I'm tearing up thinking about it). Some time after Trixie was euthanized, Koontz and his wife were still devastated (of course) and went for a walk. A golden butterfly of a type they'd never seen before fluttered around them and brought them peace. They considered it a message from Trixie. When our golden Hoover was dying of cancer, we told him he needed to send us a golden butterfly. He sent us Daisy, instead, and we occasionally refer to her as our golden butterfly. She's such a good girl!

Today's card reminded me of Trixie. And Hoover. And the incredible joy that dogs bring to our lives. Aren't we so blessed...even when we want to kill them for digging a trench around the cover of the septic tank and they come into our house covered in mud? I mean, seriously, the brat even had mud behind his ears. How?!?!

Cooper is not a golden butterfly. 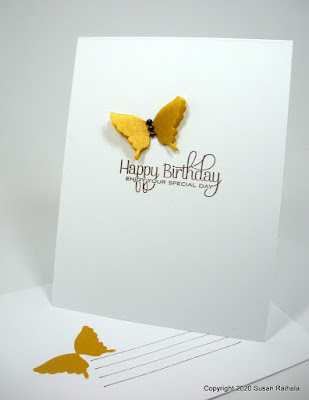 The butterfly is die cut from shimmery gold vellum, and the sentiment is an old one from Papertrey. The bottom layer of the butterfly is glued to the card base, and the top two layers are glued only at the center. The effect is lovely! 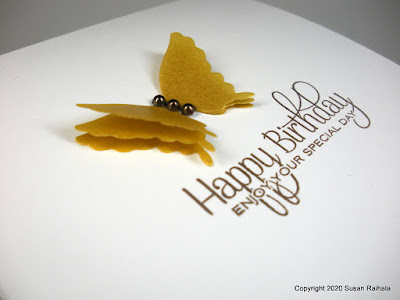 Life is good. Trixie says so!

Alrighty. This turned into a Christmas card because I couldn't think of a four-letter word that worked for a birthday card. B-Day doesn't work for me. But this card was inspired by a number of grid cards and cards using fabric that I saw on Pinterest. 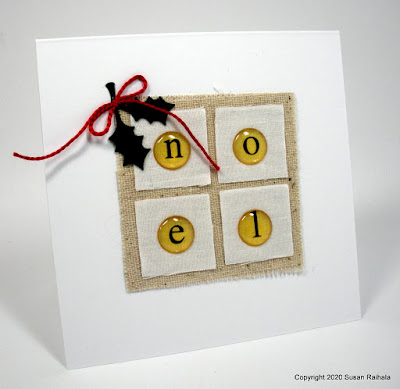 There's no stamping on this card. I used acrylic letter stickers that have yellowed over time (they aren't quite as yellow in real life as they are in the pictures...but close), green velvet paper (punched), natural and white muslin (cut with dies), and red craft floss.  It's all held together with Scor-Tape and a bit of glue. 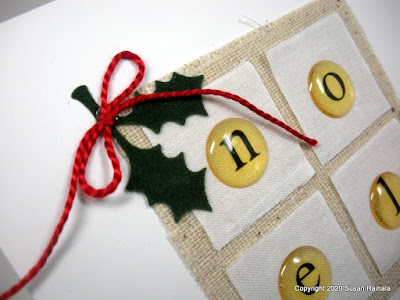 Next up, a birthday card!

The Muse Showed Up

So today, I sat down at my craft desk with iPad open to Pinterest, and THIS PIN by Mia caught my eye. It instantly brought to mind the manuscript background I've had for forever, which is reminiscent of a miniscule script used in early medieval manuscripts from Carolingian France and the British Isles. That thought led to other Celtic-themed thoughts, and this Christmas card was born. 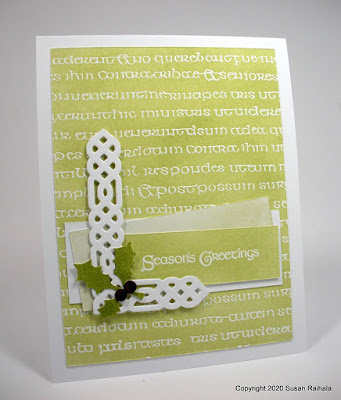 The only sentiment I have with a Celtic vibe is this Season's Greetings stamp, so the card, of necessity, became a Christmas card. You can clearly see the influence of Mia's gorgeous card on color and layout, with the only significant changes being the use of a Celtic border die (from Papertrey, trimmed down from a full frame to only an accent corner) and addition of the holly (punched) and two dark red rhinestones for berries. 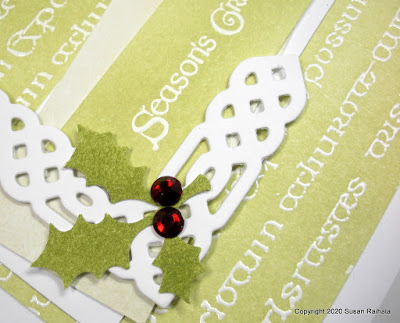 This card took about an hour to make, given the heat embossing and inking that went into it. The inks are all Tim Holtz distress inks. It's much more involved and fussier than my usual cards, but the medievalist in me adores the Celtic theme...and it's a hard one to render with my usual abundant white space.

Thank you, Muse, for showing up today. That was fun!

For those of you interested in reading Shakespeare this year, I've moved the discussion to Facebook. Just look for The Canon Resurrected Discussion Group, request to join, and I'll add you. We read The Comedy of Errors in January and were mostly underwhelmed by its predictable plot and weak character development. It was, nevertheless, the perfect play for getting used to early modern English again because it was very, very short.

Our February read is the much more enjoyable As You Like It.

If you're scared of reading Shakespeare, I recommend the No Fear versions, which are very affordable as ebooks. They have the original text with facing page modern renditions, so it's easy to check when you get lost. It's amazing how quickly it all comes back...or you learn to adapt to the differences if you've never ventured into Shakespeare's world before. Join us!

At this point, it seems appropriate to share a pet peeve of mine. Some people refer to Shakespeare's language as "Old English." No, no, no. Shakespeare wrote in Early Modern English. Here's a sample of Old English:

I copied this from Wikipedia. It's the opening of Caedmon's Hymn, the earliest recorded poem written in Old English (7th c.). Listen to a reading of it HERE. That's Old English...a very Germanic language. Whole classes study Old English. I've taken two myself, and never fully mastered it.

Middle English is easier, a strange melding of German and French, that takes a few weeks of dedicated reading of footnotes and acceptance that words might appear in weird order and simple words like green could be spelled grene, greene, greine, etc., because there were no dictionaries, grammar nazis, or spell check.  Here's the opening to The Wife of Bath's Prologue from Chaucer's Canterbury Tales (late 14th c.) (source):

You can recognize most of these words, right? They were pronounced differently, with continental vowels and those gh's are pronounced like the German, with much hocking of loogies. But it's much closer to modern English.

So when you get to early modern English and Shakespeare (late 16th c.-early 17th c.), with his "To be, or not to be, that is the question...," it's comparatively easy!

And thus endeth the linguistics lesson you asked for. Or not. Whatever. Join us for reading the Bard. He's way more fun than linguistics, and not nearly so hard as you might think.