One of my aunts loves the color purple, and as I contemplated this fact for her Christmas card, my first thought was snowflakes. Then, I found the Fair Isle Motifs stamp set from Papertrey, and this card was born. 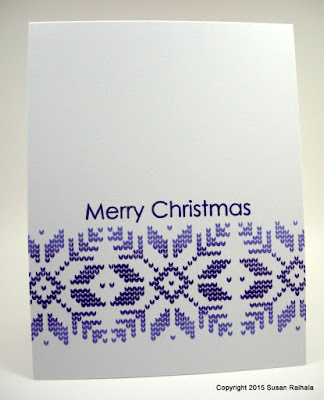 The ombre effect was achieved using two shades on a Kaleidacolor ink pad. The dark purple ink pad was on the bottom of the row of pads, the lighter shade the next pad up. I simply inked half the stamp by tamping it repeatedly on the pad, moving the stamp slightly up and down to get a good blend of the two shades. Then, I turned the stamp upside down and repeated the process. This gave the strip of dark purple across the middle of the design, fading to light purple top and bottom. It took three different impressions to make the border.

Isn't the effect pretty cool?!? I love this for my aunt and know she will completely appreciate it. I also love that the card is so interesting yet completely, absolutely flat. No problems mailing this whatsoever!

Now for the funny stories. Y'all know that my younger son, Jack, is on the autism spectrum, which means he has difficulty with metaphorical or figurative language...he tends to take people's words very literally. We were driving to Barnes & Noble (a common occurrence in our lives) after having stopped at McD's (not so common) to get Jack fries and a cookie. (Don't judge my parenting until you walk a mile in my shoes...people with autism often have food issues. Jack makes Mikey from the old Life cereal commercials look like a gourmand.)

Anyway, my husband George called Jack a cookie monster, and Jack was offended. We tried to explain that George wasn't insulting him. Anyone who really likes cookies can be called a cookie monster...we weren't trying to offend him, just making an observation. He shot back, "Do I look like I have blue fur to you?"

And that put us in our place.

Our older son is quite amusing as well. Nick did a lab report on an experiment with a soda-bottle biome, in which he had to grow various plants and keep a fish and cricket alive. In the Discussion section of the report, he wrote: "The carrot plant grew but then died. We suspect the cricket."

He's doing extremely well in biology. I think I'd really enjoy having coffee and conversation with his teacher!