There are times--not often but they do happen--when I experience die envy. Sticking to my simple principles and eschewing the whole Big-Shot-and-million-die money pit can leave me feeling deprived and wanting to punch something.

So today I pulled out a bunch of punches and played around. The results (being mostly white) are extremely hard for me to photograph, so I'm not sure how these pictures will look on your computer screen, but I hope you get the idea. In real life, it's so pretty!!!!

I started off with no sentiment and just three little light purple rhinestones, but it did look a bit plainer than I wanted. 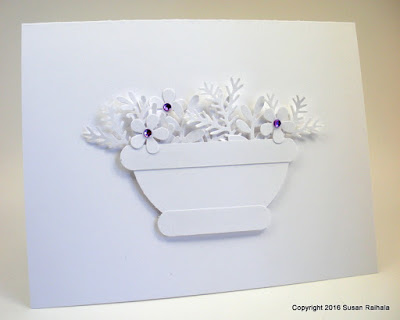 So, I added a sentiment to the bowl, and the result looks much more grounded. Weird, huh? 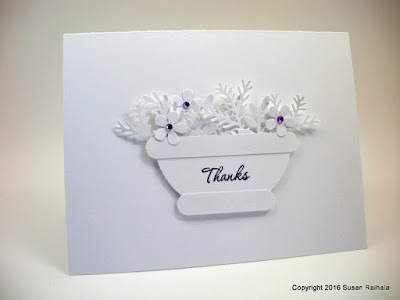 It's okay if you prefer the plainer one, though. I still like it. 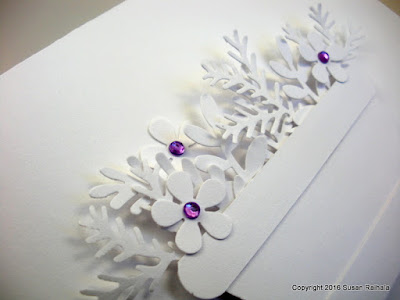 The close-up shot really conveys the depth and dimension on this card. It really is beautiful!

To make the bowl, I punched a big circle (the pink Marvy one) and cut it in half. Then, using the StampinUp word window punch, I cut two strips (3/8" high) for the foot and rim of the bowl and glued them on. Then, a strip of adhesive from a tape runner gave me a way to stick the ferns and branches to the back of the bowl. A layer of Scotch tape over the finished product added a bit more security to the fragile design.

Here's a shot of the back of the flower bowl before I covered it in SU dimensionals. 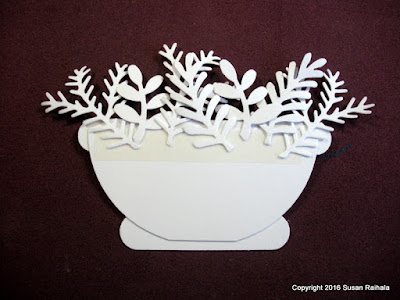 So if you're like me and don't have dies or an electronic cutting machine, pull out your punches and let loose. I feel MUCH better for having punched something, and that green envy monster is back where it belongs...which is to say, not in my craft room.