When All Else Fails...

Y'all, there have been hours of effort expending trying to create a video post on ink issues, and truly, the frustration level is off the charts. I really want to get this figured out, but things are getting busy with Ironman Wisconsin approaching. So we're stuck with the old-fashioned written post with pictures to illustrate my point, which will end up taking a fifth of the time I've spent trying to get the video together. I'm just not good, people.

Anyway, here's the problem: light shades of fast-drying pigment inks simply won't dry. A reader had this problem with one of the Impress Fresh Inks last year and never was able to get a satisfactory resolution (that I know of). I wasn't having a problem then, but when I purchased a bunch of light shades earlier this year, boy, howdy did I have the same experience she had.

If two of us are having issues, then it's likely more of you are as well. So let's crowdsource this problem, and perhaps those of us having problems will have solutions instead! Thanks in advance to anyone who can help us!

Please note that OTHER colors in all three lines of ink (Avery Elle, Mama Elephant, and Impress Fresh Ink) dry just fine for me, and I actually love them immoderately. But here are the colors that don't. 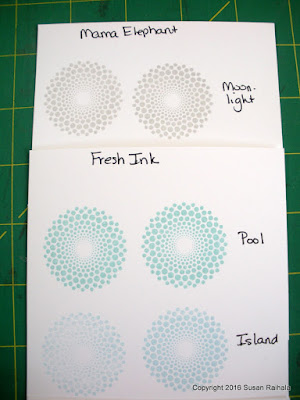 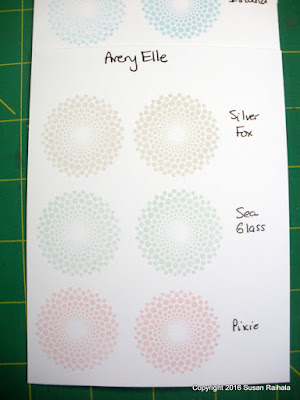 Aren't these colors AWESOME! I thought so, too, until they started giving me fits.

These images were stamped three days ago, and as you can see in the photo of my finger, they are not dry. A chalky residue comes off with even the slightest touch on all the inks. Every. Single. One. The lightest colors smear faintly on the paper, but the pool, island, pixie smear obviously. 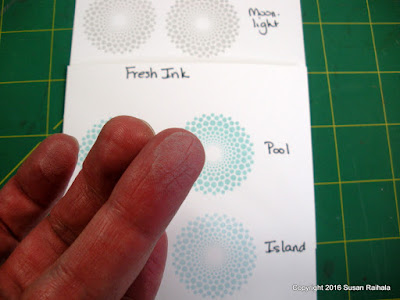 Know that I tried heat-setting these inks, with a 20-second blast from the heat gun on each image, and that made absolutely no difference. There are pieces I stamped with these inks over six weeks ago that are still. not. dry.

The only solution I've found that works is to spray a finished piece with Krylon Matte Finish fixative. I dislike this for several reasons. First, it's toxic and must be sprayed in a well-ventilated area. I took my card outside and sprayed it, but a bug flew across the spray, stuck to the card, and left bug residue on the front, ruining it. Ugh. I'm sure the bug wasn't happy, either. 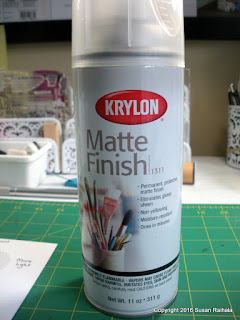 Second, spraying cardstock, even with a very fine spray, will warp the paper. This isn't a deal-killer, but the toxicity and bug residue sure are. 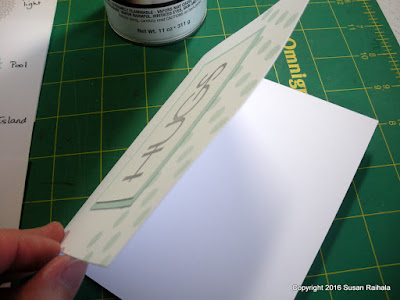 The manufacturers suggested that I was over-inking the stamps, but I disagree. The other colors of the inks dry just fine the way I ink them, and when I experimented with inking less than I usually do, poor quality images resulted...and also never dried.

The manufacturers also suggested that the paper was to blame. I disagree here as well, although with qualifications. My paper-of-choice is Papertrey Ink's stampers select white, which is a porous, uncoated card stock with great absorbency and drying time for every other ink I've ever used on it. If I were using a coated cardstock, I'd agree with the manufacturer; in my experience, inks dry slowly and sometimes not at all on coated card stock. But Papertrey white isn't coated. Neither, to my knowledge, is Neenah solar white, which I also tried, with exactly the same messy results as the Papertrey.

The manufacturers also suggested heat embossing, which I tried, and it worked. Unfortunately, the quality of embossing was disappointing. The ink is chalky but not very sticky, which means the powder didn't stick evenly, and results were blotchy and unpleasant. It's hard to see in the picture, but trust me. 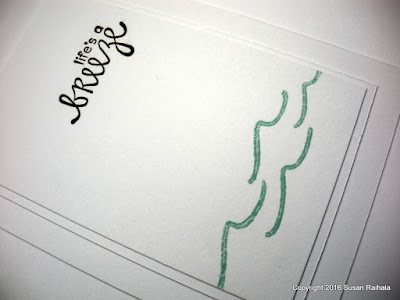 So let's recap.
1. These inks don't dry for me on Papertrey's cardstock or the Neenah solar white.
2. They don't dry for me when heat-set on porous cardstock.
3. I'm not over-inking the stamps.
4. Heat embossing doesn't work well for me.
5. Sealing with a fixative does work, but it's a pain in the patootie and toxic to boot.

To my mind, there are several variables that could be at work here. First, it could be chemistry. The lighter pigments might require formulas that affect drying. This seems possible to me because, as I stated above, other colors of inks in all three lines work great for me without chalky residue.

Second, and less likely, is that these six ink pads are defective. If it were only one or two pads, I'd say this is a possibility, but six pads from three different manufacturers? Not likely.

Third, there might be something environmental at work, perhaps humidity. This summer has been oddly humid here in southwest Ohio. Furthermore, my stamp area is in my walk-out basement. I do run a large dehumidifier nonstop in the basement, but it's not powerful enough to work over the whole large space. Basements are just naturally more humid. Perhaps when winter chill sets in and humidity drops with forced-air heat, matters will improve. But I don't want to wait. I want answers NOW!

There has to be a solution.

If I'm having this problem, perhaps you are as well. And if you're using these inks and NOT having problems, those of us who are having problems would LOVE to hear from you!

What are you doing? What is the climate where you live? What brand and weight of paper are you using? How much ink are you putting on the stamps compared to other colors?

If you are able, please make some suggestions to help us poor, lost souls who just want to make subtle-colored cards! I would be willing to buy a new cardstock or move to the desert. This summer's humidity has been just awful.

And seriously, thank you in advance for your help.
Posted by Susan Raihala at 6:38 PM