Some readers: "Tee, hee! She said, 'Paired.' Sounds like 'pear.' I know what that means!" [insert juvenile laughter]

Me: "No, a cigar is never just a cigar. And neither is a pear, especially if it's up."

Junior high is now adjourned. Let's move on. No pears to see here.

Clearly Besotted has a lovely set called Paired Up (which I will forgive it for because it clearly wasn't named by an English major), and here's a cute Valentine's Day card I made with it. 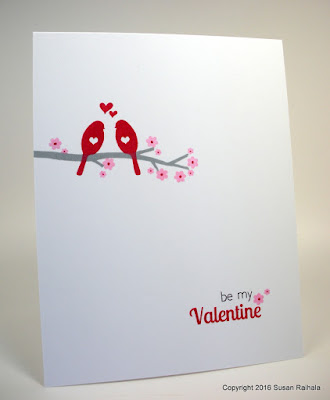 Pink, red, and gray make a crisp and sweet love-bird card, don't you think? The branch is gray because it was light enough that it wouldn't show through the red birds when they were stamped over it. No masking needed...practical and pretty!

The design looked a bit flat until the flowers got their red centers, and the little pair of flowers by the sentiment were added to unify the two parts of the design.

And that's all I have to say about that!

Posted by Susan Raihala at 8:15 PM