An Experiment: Day One (Edited)

Before we get to the experiment, let's talk about Papertrey shipping times. Reader Angela commented on yesterday's post that I was lucky I got my Papertrey order so fast as their shipping times are now at 4-6 weeks. This got me thinking. When did I place that order? In the post, I referred to last week, but when I checked the invoice, the order was actually placed January 19, and delivered February 1.

That means my order came in 13 days. I live in spitting distance (sort of) to the Papertrey warehouse, so shipping times tend to be pretty fast once an order is processed. Also, perhaps the slow shipping times started right after I placed my order. I don't know.

Why am I making a big deal about this? Well, in the past, Papertrey has been falsely accused of showing me favoritism, and it doesn't. I don't want anyone to think the company is playing favorites just because I misremembered my order date. I don't know Nichole or any of the other ladies at Papertrey and am pretty certain they don't know me or my blog from a hole in the wall. I just like their stuff and live close to the warehouse.

Also, Reader Judy asked what paper I used with the Copics yesterday. Whenever I use Copics/Bics/Sharpies to color, the only cardstock for me is Gina K Pure Luxury white in the heavy weight. It's coated, and the markers will NOT bleed through. Papertrey's white cardstock allows alcohol markers to bleed through, leaving an unsightly mess inside a one-layer card, so while it is my go-to white cardstock for most things, it's not the only one I use. Gina K's paper is slick and wonderful to blend on, by the way.

For more thoughts on products like cardstock and ink, remember there's a Product Talk tab at the top of the blog.

Now, let's move on to the experiment, which arose from a thoroughly disastrous day of stamping. You see, it's a good thing I bought nine packs of Papertrey's white cardstock because I wasted a LOT of it today. Ugh. Mojo's off, for sure. So in the end, I was staring blankly at the mess on my desk and feeling pretty defeated when the idea of an experiment popped into my head.

Along with all that glorious cardstock, my order included the set Life, which is rather old but now new to me. It occurred to me that I should experiment with this rather simple, straightforward solid-image set to see how many different supplies I could use and how many different looks I could get with it. Most stampers who like block stamps probably have a similar set laying around, and if I could come up with at least a week's worth of different looks, well, wouldn't that be cool?

So I started with a VERY simple application of the stamps: stamping them in fun colors on white cardstock. Nothing fancy, just minimalism at its most colorful. It's all I could handle in my mojo-less state. 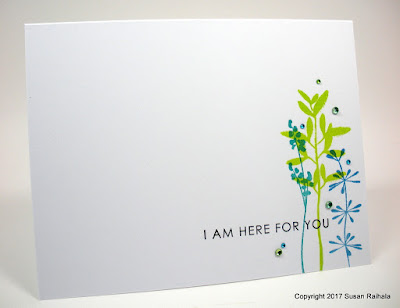 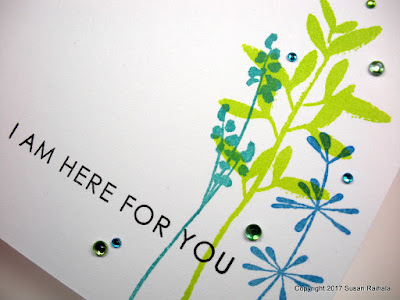 The colors were inspired by this pin, and the basic layout takes advantage of the strong vertical elements of the set by balancing them with a strongly horizontal sentiment. The bling just makes everything more beautiful.

This will be sent to a friend in April. She's having surgery then and will need some care for many weeks after.

Making a card that far in advance gives me the illusion that I'm on top of things. The reality is, I'll likely forget all about this card, make her another in April, find this one months later, and feel really stupid.

Mercy, grace, peace, and love to you...and I should probably give some to myself as well,
Susan

Posted by Susan Raihala at 6:04 PM