Once upon a time, there was a blogger who decided to spend an entire week talking about inspiration and asking her readers to share their feelings about inspiration, all the while giving away stuff to inspire people. Our blogger loves to give stuff away. It makes people so happy!

She shared good stuff about inspiration on her blog, and her readers shared even better stuff. For instance, she learned that many people both enjoy using and are inspired by patterned paper, although she herself usually ends up cutting it into little pieces and throwing it away in frustration. She has even been known to swear--just a bit--over lovely mangled sheets of Basic Gray.

The blogger loves that the world is made up of people who love different things. If everyone preferred apple pie for dessert, for instance, there might not be enough for her. She is happy to eat apple pie and let the patterned paper lovers have all the patterned paper they want without sharing any with her.

When the week of inspiration was over, our blogger felt very good about bringing all these different people together to share and discuss the one thing they most certainly all agreed on, which is that papercrafting is fun. Although she suspects a lot of them like apple pie, too.

So Friday, when our blogger needed to get to work making cards for the next week's blogging fun (what a surprise she had in store for her readers!), she sat down at her craft desk and started to work. After two hours, she realized that she had made six cards that were all crap.

Well, perhaps she was being a bit hard on her efforts, but truly, after a week of writing about inspiration like she knew what she was talking about, she had to admit that she was...uninspired.

Years ago, she would have beaten herself up as a total failure at life, the universe, and everything for something as negligible as two wasted hours. But not this time. Experience had taught her how silly such melodramatic over-reactions were. Instead, she grabbed a stamping magazine and her notebook and a pen, and she sat at her kitchen table to drink a Mike's Hard Pomegranite Lemonade and study the latest issue of Take Ten, while her husband sipped his beer and studied a new triathlon magazine called Lava. When she observed his magazine, she made no comment but totally understood the title as a reference to the location of the Ironman World Championships at Kona.

She then realized she knew entirely too much about triathlon and needed to focus on her Take Ten if she was to knock herself out of her slump, while at the same time noting that the layout of Lava might possibly, one day, provide inspiration for a card. But her husband was reading it and didn't want to share, so that would have to wait.

She sipped her Mike's and jotted a few notes and saw about fifty cards using a similar idea that she'd seen a thousand times before when inspiration struck! She got all tingly--and not just because of the Mike's--because a card popped right into her head, a card she was excited about, was willing to waste any amount of paper to create even though it would require doing things to paper that she doesn't normally do to paper. She didn't care! She immediately ran right up to her craft room to create her brilliantly brainstormed art!

This is NOT that card. 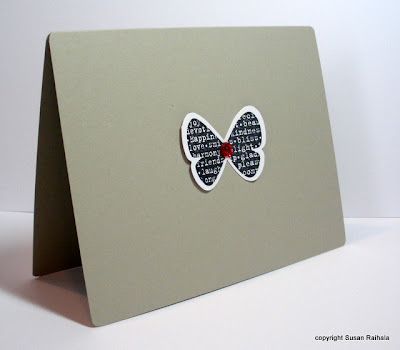 In fact, this card bears absolutely no resemblance to the miraculous card inspired by Mike's and Take Ten. This is, in fact, a card she made over a week ago with a left-over punched butterfly that accidentally got tossed on a piece of sahara sand cardstock. She liked the look of the black, white, and sand, but thought it needed something with umph. So she searched her red embellishments drawer and found this flower-shaped bling and thought, "What the heck?"

And it was good.

You'll just have to wait until next week's Mysterious Five Days of Fun to see what Mike's Hard Pomegranite Lemonade and Take Ten--and a little patience--inspired her to create. She and Mary Dawn have been conspiring again, and seriously, you will love the results.

At least, she hopes you will.
Posted by Susan Raihala at 12:31 AM