Shades of Orange Halloween Card and Follow-up on Yesterday's Questions

Don't forget about last week's OLW103 on Karen's blog...to use scoring on a card. I'll post my card tomorrow (Tuesday). It's made, but not photographed yet. Then, I'll be hosting this week's OLW104, which will go live at midnight Tuesday night.

Today's card continues the use of Papertrey's Sign Language set, which is a really fun set that covers a LOT of holidays and events. Lots of stamp manufacturers make small square images that can easily be punched out...you might have some in your stash. If so, take them out and play. It's hip to be square!

I rarely make Halloween cards, just mainly for my sons and niece and nephews. Not sure who will get this one, but I sure like it. 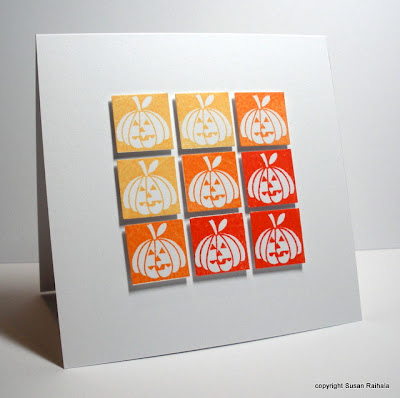 Using the three shades of Memento orange, I created a graduated grid of pumpkins. Now, I want graduated orange bling to dress up these pumpkins, but perhaps that would be too much.

Some people are afraid of grids because they worry about precise placement. Here's what you do. Start with the square in the center of the grid and lay all nine squares out, using a ruler to keep the margins even all around. I usually aim for a 1/8" gap between all the squares. Then, remove the center square, put a dimensional on it, and replace it carefully WITH TWEEZERS. Then, repeat the procedure with the other squares.

Do not be afraid! It's only paper!

And now for follow-up on yesterday's Memento ink issue.

I'm pretty sure the issue is over-inked pads. I spent some time today blotting the pads (mine are dew drops) onto Bounty paper towels (because Bounty doesn't leave lint). I consoled myself on the waste by acknowledging that the pads weren't usable any other way.

Blotting definitely helps cut down on the blotchy images, although perhaps not enough as the new colors still don't seem to stamp as cleanly as the old ones. Maybe I need to blot some more, or maybe the pads need to rest after being violently smooshed into stacks of paper towels. I'll let you know how things go over the next few days.

Blotting also makes the darker shades a bit lighter, which is a really good thing because the dark purple, evergreen, and espresso were so very distressingly dark that they looked black. Now, they're somewhat prettier and more likely to be used by me.

I'm going to send an email to the manufacturer, though. Too much of a good thing isn't always good, and I wonder how many people have given up in despair because of too much ink.

And on another note, I'm feeling much better now. Thank you all for the well wishes!