Gettin' Punchy: How to Make the Easy Hard

Yesterday, I wrote that I would post a more difficult negative-space card. It is more difficult than yesterday's card, but not for reasons you might expect.

Basically, it's the exact same idea, but getting the placement of the background correct was made very difficult by the closeness of the negative space to the edge of the card stock. 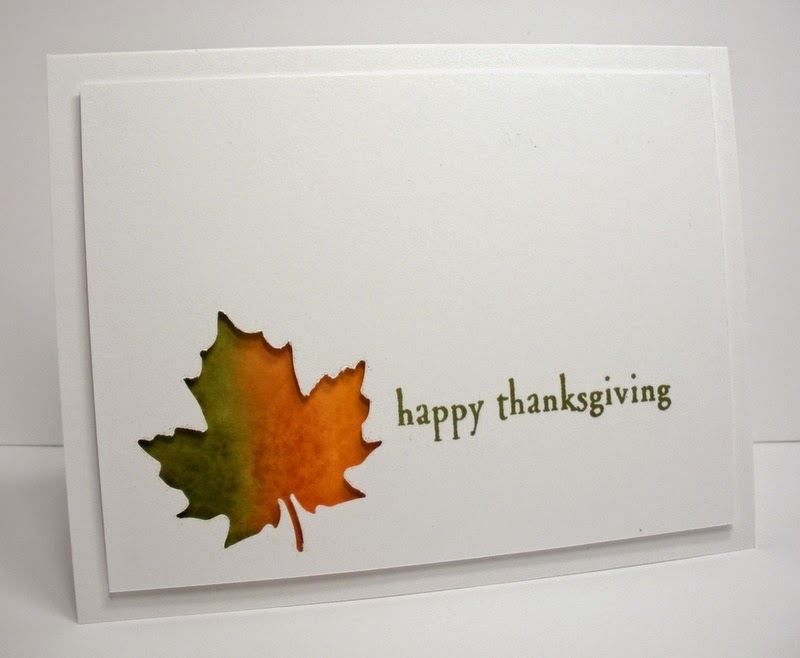 The leaf punch doesn't allow a lot of space between the edge of the negative space and the edge of the paper. Because of that, I had difficulty placing the stamp. Instead of risking getting it in the wrong place (and because I'm WAY TOO LAZY to use a stamp positioner!!), I cut out the stamped area and glued it down where it needed to be.

A stamp positioner and pencil guides would have made this a piece of cake, though. Lazy people spend too much time figuring out work-arounds.

Anywho, notice that the spectrum moves side to side rather than top to bottom as with yesterday's Christmas tree. My design intention with this was to unify the leaf and the sentiment with that fabby olive green. The orange between is the icing on the cake.

I love fall. A few of our leaves are starting to turn already, but it's hot and humid as all-get-out outside. Blech. Looking forward to cool, crisp days and clear blue skies.