Winners, and a Card That Proves a Point

Since only two people participated in the challenge, I decided to send BOTH a little treat. Will Marianne and Elsie please email your snail-mail addresses to me (susanraihala at roadrunner dot com) so I can get your treats to you. I hope the rest of you will check out Marianne and Elsie's cards and leave a little love in the form of a comment...their cards are creative and delightfully inspiring!

Also, someone asked if Papertrey sold punches. Back in the days before everyone became die-crazy, Papertrey offered two punches to accompany their set Heart Prints. The punches are no longer on the website. Instead, the stamp set and a small die set are available. This makes me sad, but those of us who are holding out on die cutters just have to accept that we will never be as cool as those with die cut machines, and that's okay. We find other ways. Hearts really aren't that hard to cut out.

Now, today's point. Sometimes, I try to force a card to fit some sort of preconceived idea of what I want. And sometimes this works great. Other times, it takes a day or two of sitting on it for me to realize that I'm making the creative process harder than it needs to be.

Perhaps you can relate?

Anyway, I tried really, really hard to make today's card with three hearts...one large and two smaller...to follow the rule of threes and to create a visual triangle. The three hearts took full advantage of the spectrum on the Kaleidacolor Spectrum pad and the IDEA was so incredibly cool.

In reality, the design simply would not come together. Very frustrating, until I decided to simplify. Then, it made perfect sense...from a simplicity point of view. 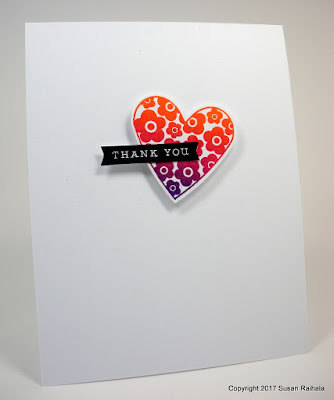 The large and colorful heart, used without following the rule of threes, combined with a fun black banner, was all the card really needed. I did follow the rule of thirds by placing the heart and sentiment along the imaginary line marking one-third the way down the card, though. 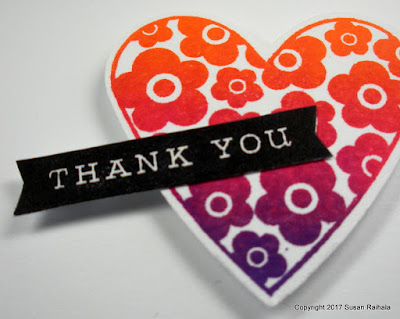 So glad I finally got there.

No new pictures of Cooper, but it's seven days until we pick him up in Toledo. I can't wait!