Ocean Spring and Other News

After years of searching for the perfect underwater set, two Hero Arts sets made my heart go all pitter-patter: Color Layering Octopus and Color Layering Seahorse. Today's card highlights the former, with a sentiment from the latter. 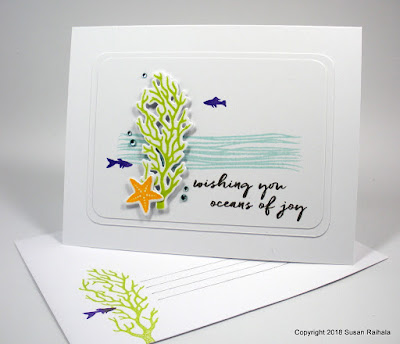 That seaweed stamp and die are so. incredibly. awesome! I love how the holes in the die allow such pretty shadows to create some wonderful dimension on a card.

To keep the design from being too busy, the stamped water background is partial...just a hint that it's an underwater scene. Also, the corners are rounded because pointy corners looked harsh.

How's that for a technical reason for a design choice?

It's also fun that the spring flower color scheme is being used for an aquatic scene; it gives the card such a fresh and happy tone.

Someone recently asked for an update on the dogs. This photo pretty much says it all. Cooper is clearly a much-neglected and abused pup, seeing as how small he is for seven months old. He wants me to tell you that he doesn't get enough treats, and his big sister beats up on him all the time because he's so runty and weak.


Actually, Daisy is the injured one. She rubbed a sore on her nose somehow but is recovering nicely.

She was such a love when they went to the groomer for Cooper's virgin grooming. She tried to teach Cooper how to get into the wire crates and got separation anxiety when they took him to the other room for his bath. Cooper wasn't happy with the wire crates (he sleeps in a molded plastic airline crate) or with the blow dryer (he pooped on the grooming table). Good times for Ms. April the Groomer. Otherwise, he did great, but April's assistant will be my first suspect if Daisy gets kidnapped. He loves her.

Cooper is more like furry white energy. He's an imp. Last week, I was standing near the door, and he ran to me, jumped straight up, and licked my lips. Ewww.

This is the look he shot me when his butt slid off the ottoman. 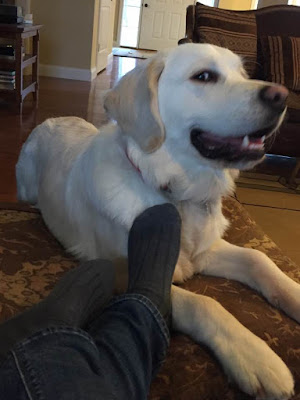 "Do I get a treat for that trick?"

No. Gravity and lack of coordination won't get you a treat.

This weekend was the Special Olympics bowling tournament, and our son Jack got his first blue ribbon after about five or six years of bowling! He was overjoyed and told me that he'll have his name called out during the announcements at school on Tuesday. So yay, Jack!