After the Purge, Part 1

Perhaps some of you will find it useful for me to write about how my hoard supplies are organized and the thought process behind that organization. Maybe you'll find inspiration to purge your own hoard supplies or re-organize in a way that makes it easier to find and--surprise!--actually use your stuff.

Of course, some of you may be avid collectors who enjoy having rather than using. To each her/his own...I'm not preaching, just sharing what works for me in the hope that you'll adopt, adapt, modify, or discard my suggestions as suits you.

I'm a practical minimalist of a sort. This doesn't mean I don't have a lot of stuff or buy new stuff. It means I try to curate my hoard in ways that eliminate what doesn't turn out to be useful to me. Over time, my ability to try new stuff and discard what doesn't work for me quickly has improved enormously. It's an evolving process that suits my mild an*l-retentive, obsessive-compulsive tendencies. During this particular purge, I found myself letting go of some stuff that I've held onto for far, far too long.

So let's take a look at one before/after area of my craft space.

Let's work from the bottom up.

1. The three-drawer unit on the left contains markers. The top drawer is StampinUp/Memento markers, which might end up going away eventually as I hardly ever use them. The second drawer contains scrapbook markers, which I use regularly for things that don't get posted on the blog, like my signatures on the back of cards for Karen's Card Shop. The bottom drawer contains a bunch of Sharpies, which also get used. (At one point, I gave most of my Sharpies to the preschool at church, and then I had to buy them all over again because I kept needing them and didn't have them and ohmygosh how frustrating. Live and learn.)

Sheets of craft foam rest on top of the unit. They are perfect for popping up larger panels on cards.

3. The three-drawer unit on the right contains inking supplies such as stipple brushes (a favorite!) and sponges in the top drawer, a bunch of spare ink pads in the middle drawer (I purged about half of these, mostly Memento dewdrops), and odd ink types that I use, but rarely (Staz-On, StampinUp craft inks) on the bottom.

4. The six-drawer unit to the right of the bookshelf contains punches, mostly themed ones (hearts, stars, snowflakes, ocean animals, leaves, etc). I purged just a few of these because I really like and use most of them, but I got rid of (or moved to my basement storage) the two white bins full of basic shape punches in the before picture. My plan is to buy a set of circle dies to replace all but the 1" and smaller circle punches (which are too useful to let go). I haven't used the scalloped circles and squares in years, and my Creative Memories oval cutting system is far more useful and used than the oval punches ever were. And I'm not sure why I ever bought the larger square punches as squares are a cinch to cut. The smaller square punches (especially the 3/4" square that's fabulous!) joined the smaller circle punches in an empty drawer on the baker's rack for now. I'll show that later.

5. On the top shelf, one of the white photo boxes houses my reinkers (replacing the purple box in the before picture). The photo boxes are handy for storing cards I make far ahead of time, like Christmas and Thanksgiving. The second box is for Thanksgiving Crusade cards.

7. On top of the bookshelf rests my adorable Cuttlebug, a gift from my friend Eva. I felt cramped with the baskets of dies and Cuttlebug accessories on the top of the bookshelf, so I moved them to the large bookshelf to the left of the smaller one. I am intentionally keeping my dies limited to this one basket. It would be too easy for me to go crazy and buy LOTS of dies that never get used, which would violate the simple, minimalist vibe I try to cultivate for myself. 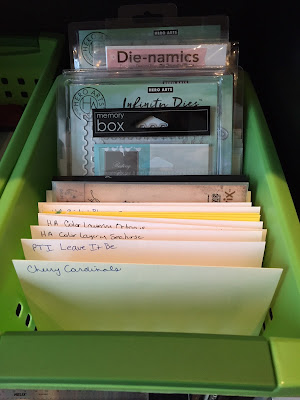 And that's one section of my reorganized and purged craft space. Any questions? I love answering hoard-organizing queries!