So today's card was totally inspired by THIS PIN by Kate Wilson. I love it so much...the red square, the white snowflake, the little gemstones, the subtle sentiment...basically, I love everything about it. Kate is a genius!

But here's the card I made. Hmmm. 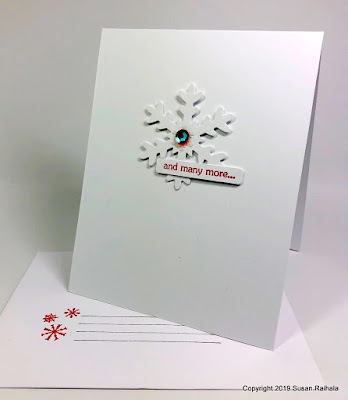 Where, you might ask (with complete justification), are the red square, subtle sentiment, and tiny little rhinestones?

Well, I realized something as I kept cutting down a square of red cardstock to get the perfect balance behind my snowflake. My snowflake punch punches a chubby snowflake. Whatever punch or die Kate used is delicate, curvy, and beautiful.

Her snowflake is also not a natural snowflake shape as snowflakes have six arms, not eight, but really, artistically, should we be sticklers on this point? I'm not going to hold wrong numbers of arms against snowflake stamps anymore because it makes me feel OCD and obnoxious. Feel free to condemn inaccurate snowflakes yourself, of course. I'm not going to tell you what to think because in addition to being irritated by inaccurate snowflake stamps, I used to hate turning odd numbered years of age, which, honestly, is borderline pathological weirdness, so who am I to judge? 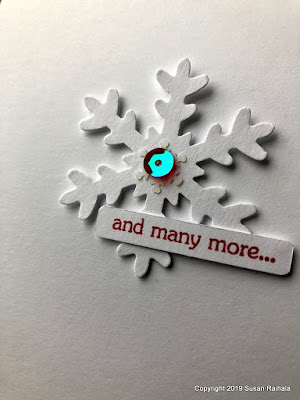 By the way, I just turned 53, which is both odd and a prime, and I'm just fine with it. I considered the alternative. I also credit the meditation I've been doing lately with overcoming at least a bit of my OCD. Yay, me!

Anyway, my snowflake is not delicate. In fact, its chubbiness was not flattered at all by a high-contrast background that merely emphasized its thickness. So I ditched the red square. Now, my snowflake feels better about itself.

Without some contrast, however, the card looked rather blah, so I decided the sentiment needed to be bolder, and instead of clear rhinestones, an iridescent red sequin layered over a snowflake sequin would add sufficient interest.

It's interesting how the sequin flashes turquoise in some light. That's real, not some weird photography trick.

I've used the word weird a lot in this post. Perhaps it's time to go to bed.

Anyway, I hope to have lots of time to stamp over this Thanksgiving week, and I hope in between stuffing turkeys and baking pies, you do, too.

Posted by Susan Raihala at 9:32 PM