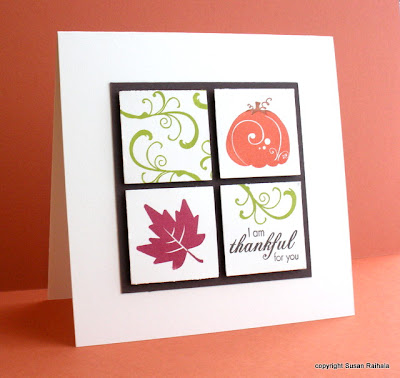 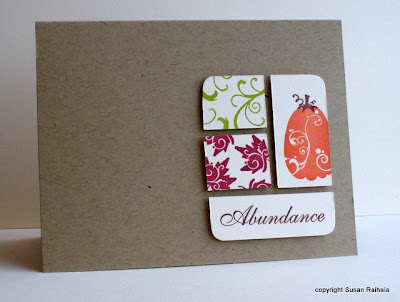 Fall Elegance is truly a magnificent set to work with. Those swirly leaves and vines are so pretty and yet crisp (like fall, really) and the pumpkins make my knees weak. I'd marry this set if polygamy was legal.

Today's cards, though similar in many ways, show how color and balance can make or break a card. I made Card #1 first and kept it out in my craft room for days just staring at it and smiling a lot. It has everything I love in a card: lots of white space; clear, crisp lines; lots of right angles on a grid with hints of asymmetry to liven things up; rich, smooth colors; beautiful images. See how the swirl in the sentiment block sort of flows from the upper left block? That was an accident, and if I made the card over again, I'd line the swirls up better.

Creating a relationship between blocks in a grid is good design.

Card #2 isn't exactly bad, but it's not as strong a design as #1 for two reasons. First, the shapes are floating on the background rather than grounded by a matte. They wouldn't look so floaty, I think, if the card base had a good relationship with the blocks. What do I mean by that? Well, there's no kraft on the blocks, and there's no color from the blocks in the kraft. Sometimes, that can work by creating a nice contrast on a very simple card, but these blocks are stamped with busy patterns that beg for unity with the base. A cream, pumpkin, or chocolate base would have worked much better than kraft.

Why don't I think of these things until everything is stuck down on a card?

The second reason Card #2 doesn't work quite so well as Card #1 is that the blocks aren't quite as balanced. The pumpkin block has just a little too much white space compared to the other two blocks. A swirl moving from the pumpkin block to the swirl block would fix that. The word block, on the other hand, is a lovely balance to the busier blocks and draws attention to the sentiment nicely.

That said, I really like the four rounded corners and the placement of the blocks on Card #2.

So there you have the musings of a highly trained literary critic applying her skills to cards. We English majors are so versatile!

Posted by Susan Raihala at 7:00 AM

Email ThisBlogThis!Share to TwitterShare to FacebookShare to Pinterest
Labels: Design Discussion, For Seasons, Stamps by Papertrey