Some people are afraid that when they stamp, they will stamp crooked or off-center images, or that images won't line up precisely.

That's a valid fear. We stamp by hand, and anything done by hand is likely to be a little off. I encourage you use my Two-Step Method of Overcoming Stamp Fear:

Step One
Say, in a loud and firm voice, "IT'S ONLY PAPER!!!!" Repeat until you believe it.

Step Two
Use your gridded acrylic block with confidence.

This tutorial will point out how to do Step Two. For Step One, you're on your own. I don't do videos and it would be really boring anyway.

Here's what I started with: ink, stamps, a card base, and an acrylic block with grid lines. The stamps are from Papertrey's Simple Little Things set (an anniversary set from years ago...awesome sentiments!). 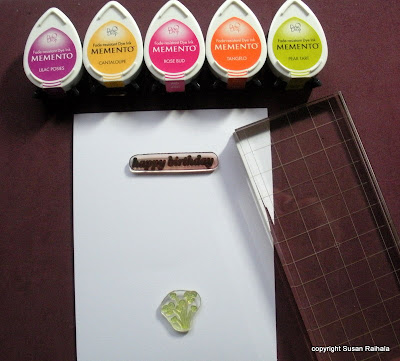 1. Put the sentiment stamp on the block carefully, making sure it is perfectly centered and aligned on the grid.

When I mounted the happy birthday stamp on the block, I made sure the sentiment fit with the exact middle of the block and straight over the central line. You'll notice that there is the same amount of space between the left edge of the sentiment and the nearest vertical line on the block as there is between the right edge of the sentiment and the nearest vertical line. Don't let the flashing of the stamp fool you, either...there's more flashing on the right than the left, which makes the stamp look slightly too far right to be centered. Focus your attention on the actual image, not the flashing. It helps if your stamp is stained...clean, new stamps are a pain in the tookus to line up because they are so hard to see.

(Flashing, in case the term is new to you, is the part of the stamp that isn't supposed to stamp, in other words the stuff that sticks to the block, not the stuff that touches the paper.) 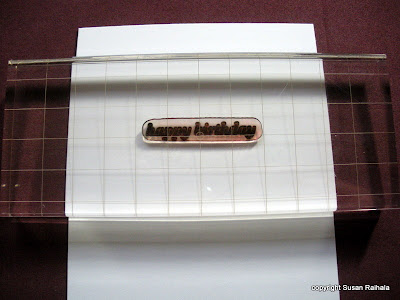 2. Start stamping at the top of the card.

Notice that there are grid lines in all the tutorial photos about an eighth of an inch inside the edges of the card. Both lines are parallel to the edge of the card and evenly centered on the card. When you want to center something precisely on the card without measuring and drawing pencil lines, just use the grid lines!
3. Use the first stamped sentiment to place your second one.

Notice how the horizontal line on the grid above the sentiment lines up exactly under the first stamped sentiment. You can even check the vertical lines that pass through the sentiment letters to see if you're lined up properly. And ALWAYS check the lines on the edge of the card, too. THEN stamp your next image. 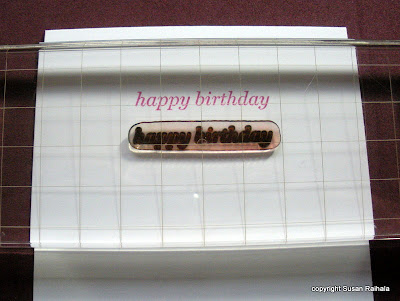 4. Repeat five times down the card.

When you make a mistake, remember Step One of Overcoming Fear. It is entirely normal to screw up, drop the block in the wrong place, smudge a letter, drop an ink pad on your card, or any number of other mistakes. We are humans, not machines. Screwing up is annoying, but IT'S ONLY PAPER. Cut another card base and try again. You'll get there. 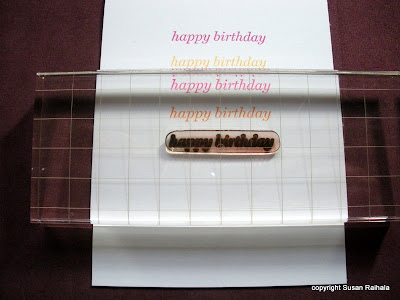 5. The centering works just as well with images as it does with sentiments.

Asymmetrical images like the flowers below can be a tad awkward, but close enough works here as precision with the asymmetry isn't quite as critical. 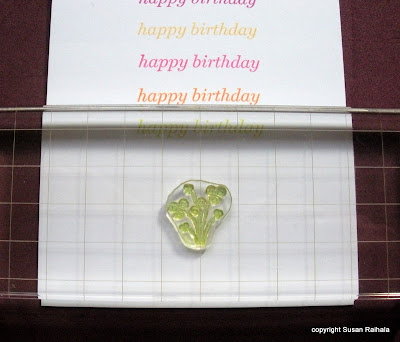 And that's it for precise placement. Practice makes perfect. I made lots more mistakes and ruined lots more paper when I first started trying. Now, it's rare that I screw up. But it does still happen. And I yell darn it and start over again.

To finish this card, I embellished the flowers with pink bling and orange Smooch. It seemed like the right thing to do. 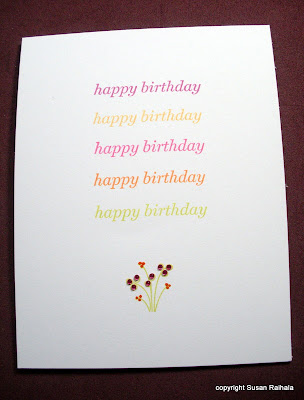 Then I rounded the corners of the bottom of the card and snapped a formal picture. 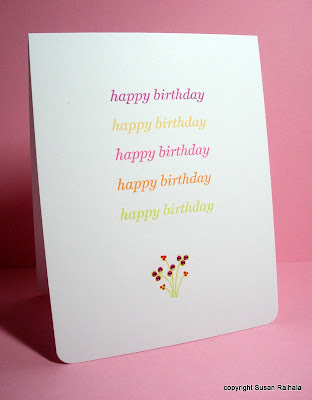 Email ThisBlogThis!Share to TwitterShare to FacebookShare to Pinterest
Labels: Tutorials and Techniques