One-Layer Wednesday 102: While We're on the Subject

Ardyth's first OLW challenge is to make a card based on your favorite school subject.

Well, I often have a problem with the word favorite (or favourite, as Canadian Ardyth spells it). I loved most subjects in school except physical education, and yet somehow I still ended up taking two pleasurable semesters of swimming in college, despite the fact that I chose Duke because there was no physical education requirement.

But given the fact that I majored in English and went on to earn a graduate degree in English literature, it was only logical for me to make a couple of literature-themed cards.

Oh how much fun I had! Thanks, Ardyth, for giving me an excuse to parade my geekiness for the stamping world to see! 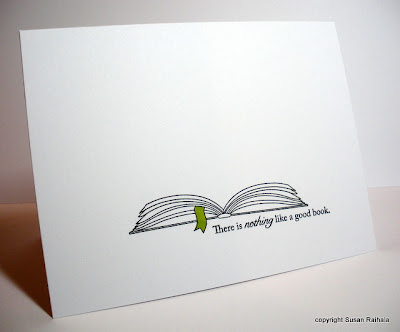 First up, a card using Papertrey's All Booked Up. That book is one of my favorite images EVER, because it's so simple and big and clean and perfect. Coloring the bookmark my favorite color: pear tart. And now I'm giggling because pears are part of the reason I majored in English, but that's another story. 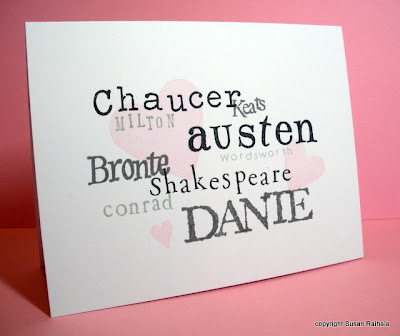 Next, I pulled out my alphabet stamps and made a fun word collage of some of my favorite authors' names. The inks are angel pink, black, london fog, and gray flannel from Memento. The hearts are arranged in a visual triangle, as are the names for each color.

Just realized I forgot the dots over the e in Bronte. I'd planned on using a colon stamp on its side to make that umlaut or whatever you want to call it.

Just realized I have no idea how to type the html code to make the umlaut in Blogger.

I can live with that.

What a fun challenge! If you haven't played, there's still time. What's your favorite subject?

For those of you who read Simplicity for stamping, you are excused. For those who read because I rattle on weirdly about whatever's in my head, you may stay, but only if you like literature, because really, this is some serious literary nonsense.

Chaucer wrote Canterbury Tales, and I wrote my master's thesis on The Wife of Bath's Prologue and Tale. But the best tale in Canterbury Tales is The Miller's Tale. It's a big part of why I majored in English...because it's bawdy and it's literature! Literature can be bawdy, and oh, my, that makes it fun! Another reason why I majored in English is found in The Merchant's Tale, where a pear tree figures largely in the plot as the place for an illicit tryst. The shape of the pear...oh, never mind. Just read this.

Keats wrote "Ode to a Nightingale," one of the prettiest poems in modern English, and my paper on it earned an A from Professor Gleckner. Keats' "Ode on a Grecian Urn" wasn't too shabby, either.

Milton wrote Paradise Lost. In 12th grade, my paper on Paradise Lost earned me an A+ for the rest of the year. "There's nothing more I can teach you in high school, Susan," said Mr. Lentz. "Now, write like that for some reason other than the grade." There's a reason why Sylvia Plath isn't on this card. The next paper I wrote was on her Colossus, and it was beyond terrible and so very hard to write. I studied Milton again with the famous Reynolds Price (novelist and scholar) at Duke. You can read about that here.

Jane Austen. Pride and Prejudice. Can you just imagine how horrible the world would be without Darcy and Lizzy? It doesn't bear considering.

Wordsworth wrote all sorts of amazing poems, but the one that sticks with me is "I wandered lonely as a cloud." I like daffodils.

Charlotte Bronte wrote Jane Eyre, of course, but less well known and even better is her novel Villette. This novel provoked a firestorm of controversy in my graduate class on the Victorian novel, taken with Dr. Nancy West, who was an absolutely fabulous teacher. If you haven't read it already, please do so, and then tell me if you liked the ending or if it made you flaming angry.

Shakespeare wrote a bunch of sonnets and plays. Some are truly great, some are really good, and a few are just annoying. My favorite plays are Hamlet, Much Ado about Nothing, A Midsummer Night's Dream, and The Tempest. Which are your favorites?

Joseph Conrad wrote The Heart of Darkness. It contains the single creepiest-yet-beautiful-sounding sentence in the English language: "A taint of imbecile rapacity blew through it all, like a whiff from some corpse." Yep. Read that when you're sixteen and suffering major depression. It'll stick with you.

And then there's Dante, author of The Divine Comedy. It's just cool. In a literary sense, of course, it's truly brilliant, genius, absolutely remarkable, eternally complex. Plus, Dante figured out a way to put all the people who annoyed him in real life into hell and had the fun of showing how they were tortured for eternity for their sins. That he could be so petty and write such an amazing piece of literature at the same time is so medieval. When I was introducing it to a World Lit class I taught at Troy University, I actually teared up and wasn't at all embarrassed.

But great literature has that effect on us English majors. We're weird that way.

Posted by Susan Raihala at 9:26 PM