A Matter of Style

As I worked through my non-SU flower box of stamps for the Use-Your-Stamps Challenge, I found myself making two cards for contrast: one with a loose, sketchy single flower (don't judge her!) and one with a stylized group of flowers. Check out the contrast in the cards. 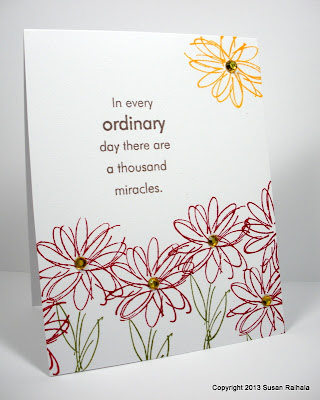 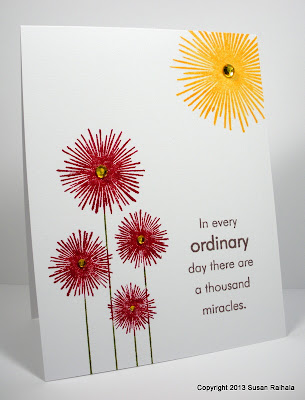 In the first card, I used the single flower and stem (Hampton Arts), colored with markers, for the field of flowers on the bottom and then just inked the flower blossom to make the sun on top. The loose arrangement of flowers meant the natural place for the sentiment was in the upper-left-hand sweet spot of the card. Yellow bling in the flower centers and in the center of the sun unified the design, in addition to the repetition of the image.

In the second card, the single stamp of four flowers (Hero Arts) stands rather orderly and tight...nothing loose about it. A larger version of the flower, which is a single stamp, wood-mounted, fills in for the sun, although the largest flower of the group could have worked, too. But remember, I'm trying to use all my stamps, right? The arrangement of the flowers meant I had to move the sentiment into the lower-right-hand sweet spot, but otherwise, the two cards have an awful lot in common.

Which do you like better? For the most part, this is a matter of taste. Some people like looser styles, and some like tighter styles. Really, it doesn't matter. Design-wise, the bottom card edges the top out slightly, though, but only because the larger-scale sun on the lower card works better. If only I had a larger version of the sketchy flower! But alas, we work with what we have.

And they both make me happy.