Keeping Thanks Simple: Day 5 (And a Question about Yesterday's Card)

Today's use of the Keep It Simple: Thank You set from Papertrey shows how easy it can be to set the sentiment off by a lovely stamped frame...in this case from Embellished Elegance. 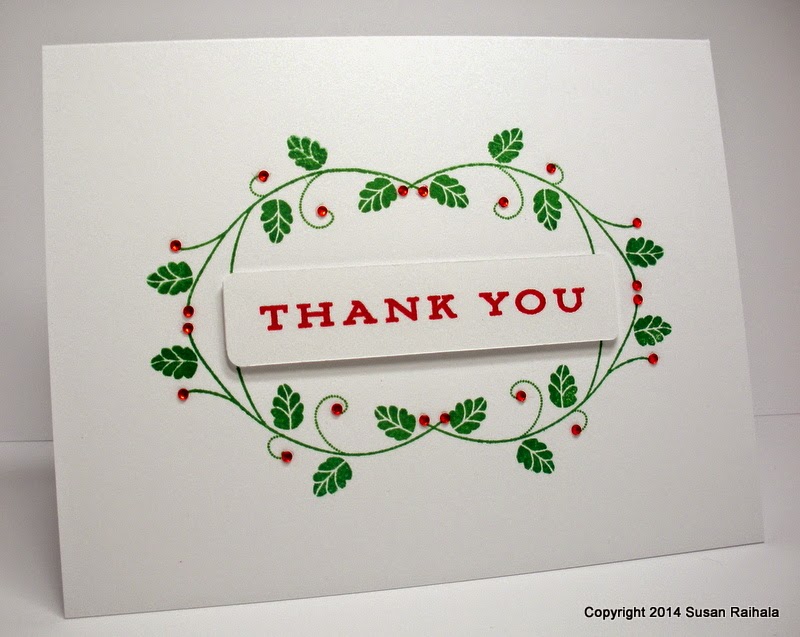 I wanted to make a Christmas-y thank you and the Hero Arts green and royal red inks worked perfectly. The tiny red rhinestones come from a rhinestone alphabet sheet I bought on sale at Michael's. You get ever so many tiny rhinestones in those sets, and it's easy as pie to cut them off the letters with a craft knife.

The only reason why the sentiment is popped up is that I accidentally stamped it in green the first time. I'd meant to stamp it in red, and may or may not have said something vulgar when I realized my my mistake. So I stamped it properly in red on a strip of card stock, cut it to size, and rounded the corners slightly with a pair of scallop-edge scissors.

You'd never know I messed up except I blabbed it all over the interwebs.

There's no "right" place to put the sentiment, and it would look perfectly lovely in the more traditional spot. But never, ever be afraid to shake things up a bit. It might flop, but it's worth the risk to be rebellious every now and then.

I hope that clarifies things.

And of course today's sentiment is centered because the frame is simply too large to fit neatly into a sweet spot.

Posted by Susan Raihala at 5:21 PM