Playing with Alphabets for Christmas

Sometimes, when you don't have a sentiment in the size or shape or font you want, you can make your own sentiment with alphabet stamps. The song says, "Deck the halls with boughs of holly...." I have holly stamps but nothing that says, "Deck the Halls." So I pulled out a small Hero Arts peg-mounted rubber stamp alphabet called Playful...and I played. 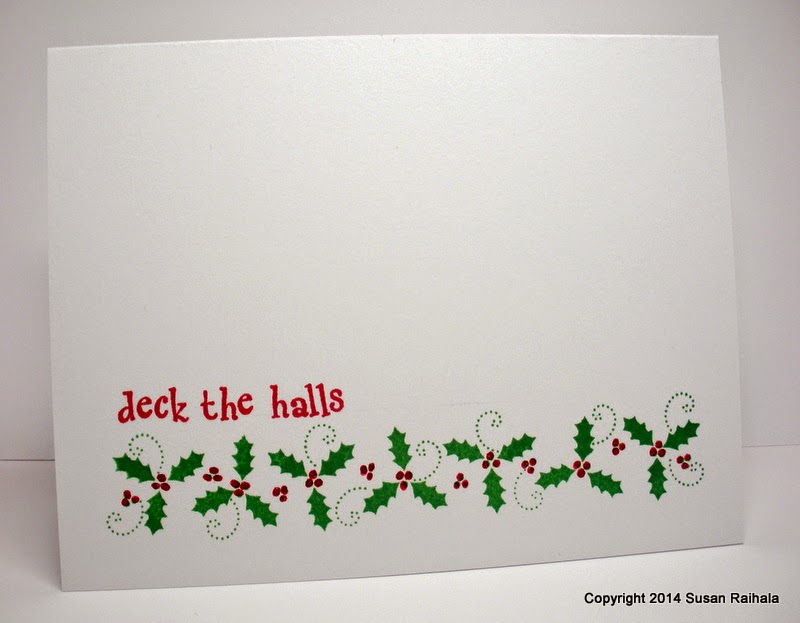 The line isn't totally straight, but it doesn't need to be with this alphabet. I did, however, try to get it straight because I'm me and weird that way. After stamping the holly border in Hero Arts green ink, I drew a light pencil line where I wanted the sentiment. Then, I did my best to line up and space the letters by eye rather than futzing with a stamp positioner, which would have taken forever.

I like the effect and hope you do, too!

The berries were rendered red with a Sakura Stardust pen, which puts down opaque, shimmery red ink that adequately covers the green.

This simple, completely flat card makes me so very merry!

Posted by Susan Raihala at 7:43 PM