Dragonflies Are NOT the Same as Goldfish (or Sharks)

Today's two cards were inspired by this card posted by Memory Box by Jean Okimoto, who is a very clever designer!

The card first popped up on the Memory Box Facebook feed. Following companies on Facebook is an awesome way to stay connected with their releases and to get ideas from their awesome designers. I also invite you to follow Simplicity on Facebook as well because, why not? Your Facebook feed is already cluttered as it is, right?

Anywho, the original card is landscape-oriented and clusters the three die cuts in the center square, but I chose to rotate the card and spread out larger shapes a bit more.  My first effort wasn't quite a hit for me, mainly because it feels too heavy and there are too many rhinestones (a result of trying to balance the design...sometimes there can be too much bling), but perhaps you'll like it. 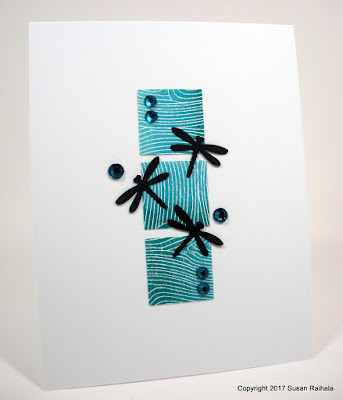 The colors are striking, even if the design feels too chunky. You'll notice the layout is almost identical to the original inspiration card, but the larger and very straight-line dragonflies don't work nearly as well as the sinuous goldfish die cuts (which look like sharks to me...am I alone in this?). Also, the background woodgrain (which works for water as well, don't you think?) doesn't have dots on it...making the round bling seem less integral to the design than the punched circles are on the original. Although I do think the woodgrain and the dragonflies work well together.

I went with black for the dragonflies because I saw a gorgeous all-black dragonfly in my garage last fall, but black simply feels too heavy, especially with the dark teal rhinestones.

My second effort lightened the whole effect with more white, less (but still bright) color, and smaller bling. It made me very, very happy! 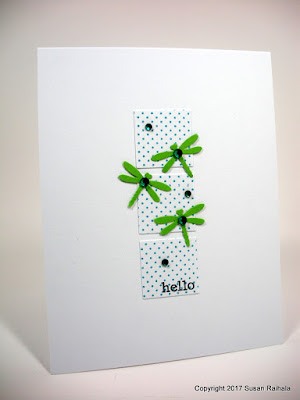 The tiny dot background unifies the bling better, and having the largish bling on the dragonfly bodies emphasizes the visual triangle of the focal point, unifying the punched shapes. Note that the smaller goldfish/sharks are, on the original card, all on the central square for unity but my dragonflies would have looked tangled had they been crammed onto one square together.

I added a sentiment because that bottom square felt too empty with just the little bling, and I was afraid of going a bling too far, as I'd done on the first card.

Anyway, this is an excellent layout and worth playing with more! Can't you just see a snowflake card, or a tiny sea horse card (I have a seahorse punch), or a star card with three circles as if you were looking through a telescope at the night sky? Oh, my! The possibilities are endless. If you try something with the layout, please share it in the comments!

Many thanks to Jean Okimoto for the wonderful inspiration.