Sometimes, multiple thoughts and images come together for inspiration, and such is the case with today's card.

First, Rita Perfater has a card on page 55 of Take Ten Spring 2017. Rita's colorful card has three watercolor strips of cardstock running vertically up and down her portrait-oriented card, with a horizontal strip over them for the sentiment. That layout stuck with me, and I wondered how I could use it.

Second, I picked up the Hero Arts set Fresh Herbs and realized I could pick three herbs and stamp the strips with them.

Third, the song Parsley, Sage, Rosemary, and Thyme started playing in my head. Four herbs aren't ideal for card design, but by rotating the card to landscape, the layout works just fine. 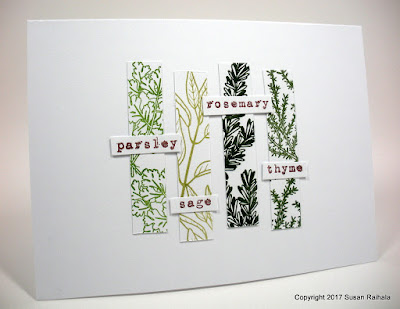 The herbs were stamped in various shades of green pigment ink on 1/2" strips, which were then trimmed to roughly 2.5", staggered on the card base (as Rita staggered hers), and labeled with their names. I love how much movement this card has...it helps make the violation of the rule of odd numbers less problematic.

Remember that generally, odd numbers work better in design than even numbers. Three strips (as Rita used) or five strips would work better from a pure design point of view. BUT the song only has four herbs.

Regardless of the rules, this card totally works for me. I hope it works for you, too! And it's all thanks to Rita for getting it started and Simon and Garfunkel for finishing it.