Today's card took almost two hours to make and was inspired by THIS PIN of a towel that's too pretty to use.

I puttered. I searched for things in my craft area...not surprisingly, it seems I've forgotten what I have and where everything is. I had fun anyway, and the results of the puttering made me smile! 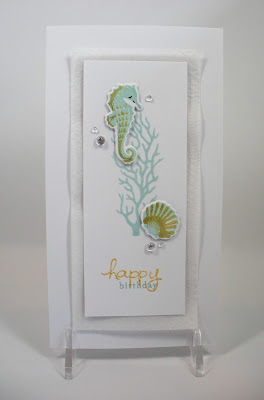 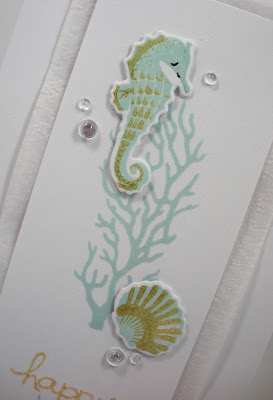 My first effort included three lines on the bottom, just like the towel, but it looked weird on a card. I redid the stamping without the lines and was happier for it!

Now for personal stuff. If you're here just for the cards, feel free to skip the rest of this post.

A lot has happened since I posted last year. I'm taking a sabbatical from teaching for the rest of the year. Bottom line, I'm burned out and need to refresh myself. The past two years have been draining and stressful. A friend told me--accurately--that I cared more than my students did. That's not healthy or helpful for them or for me. I need a little distance and boundary-building. Thankfully, as adjunct faculty, I'm blessed to have the option of stepping away temporarily and have the full support of my department chair.

My heart hurts for all who don't have that option, regardless of their profession.

On the plus side, I've been able to get out and see some performances in the last few months. First, a Jeremy Camp concert in Kentucky with my son Jack. I enjoyed this one much more than the first we went to because I had hot-pink earplugs. We were in the 5th row. 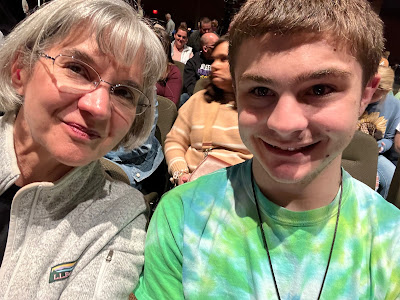 For those of you who identify as Christians, you might find my breakthrough at this concert interesting. You see, I'm definitely not a conservative Christian, and what goes on at Christian rock concerts makes me a little uncomfortable. Emotionally manipulative fundraising for a children's mission and a marketing pitch from a Christian app for the first half hour made me itchy from the start. I went fully prepared to suppress eye-rolls for the sake of my son who thinks Jeremy Camp is the bee's knees.

During one song, a man went to the stage, leaned his head on it, and started sobbing. Another man, in the front row, crossed over to him and began...well, I don't know what he was doing, but he was shouting and laying his hands on the man. Perhaps he was praying over the man, but he seemed to be talking to the man, not God.

The Stephen Minister in me turned on. "Just shut up!" I telepathically shouted at the stranger. "Listen to him! Don't jump in and assume you know what's going on! Quit shouting at him! Listen!"

But then it occurred to me that no matter how loudly the ministering man was shouting, the other man couldn't possibly have heard a word because they were right in front of a speaker on the stage. Their insides were vibrating and ears completely overloaded. This was not a Stephen Ministry moment.

Finally, the man calmed down, stood up, and hugged his ministering stranger. He seemed so peaceful and joyful and grateful.

I'm a good Methodist who occasionally says "Amen!" in service...when the pastor asks for it. So more emotive forms of religious experience aren't part of my faith life. If I ever spoke in tongues, I'd immediately commit myself to the nearest insane asylum. But I learned a lot in this brief experience, including a little humility and respect for the Spirit moving as it will in so many different ways that I'm too limited and ignorant to understand. God is so much bigger than we want to make Him.

As you judge, so shall you be judged. Scariest verse in the Bible. I learned a lesson in it that night.

And therein concludes the sermon.

Just last Friday, Nick and I saw Something Rotten, a musical about Shakespeare's competitor Nick Bottom. It was hysterically funny and quite well done, with the unforgettable rhyme "Don't be a p*nis, the man is a genius!"

I think the Bard would approve. 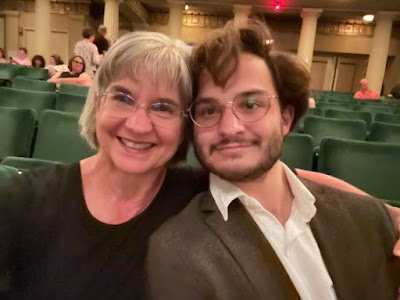 It's good to be able to get out to performances again, although still a bit scary. Nick and I debated putting on masks as the theater filled. We chose not to do so, but it felt...strange. I wonder how long it will take before the trauma begins to wear off and we can feel "normal" in crowds. With news of the monkey pox in recent days, I really do wonder.

Mercy, grace, peace, love, and good health to you all,

Posted by Susan Raihala at 2:31 PM