Promotion Congratulations and a Call for Cards

This card is going to an officer who just pinned on Lt. Col. in the USAF. 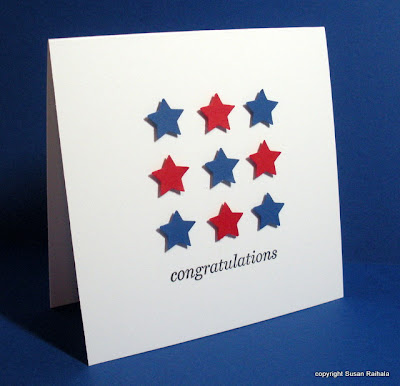 After twenty years as a military wife, I got to know a significant number of officers and was consistently impressed with the quality of men and women serving in our armed forces. In the Air Force, if you do a really good job as an officer, you'll likely get promoted on through Major. To make Lt. Colonel, however, takes more than just "doing a really good job." It takes serious commitment to excellence, superior performance, and a significant contribution above and beyond the call of duty. Not everyone makes it to Lt. Colonel, and even some who deserve the rank don't get it because of the limited number of slots available.

When I read that Darien Hammett had his promotion ceremony at Children's Hospital so he could be close to his 14-month-old son who is intensive care there, it tore at my heart. This family has been through so much: years of service to their country, with all the sacrifice inherent in that, plus eleven months of fighting a dreadful form of leukemia in their baby boy.

If any of you would like to send Darien a card of congratulations, email me at susanraihala at woh dot rr dot com. Their whole life for the last eleven months has been turned over to fighting Lincoln's cancer, and they have received amazing support during that battle. But something like the wonderful achievement of Darien's promotion can easily get set aside by other priorities. With help from even just a few of you, I'd like to keep that from happening.
Posted by Susan Raihala at 6:30 AM