I pulled out Tea for Two, a PTI set, and started playing. I wanted to use all the images so I could check this set off my Resolution List. I had already used all the tea pots, which are a gigantic pain in the butt to cut out for some weird reason. They don't LOOK like they would be hard, but they are, at least for me. Anyway, the other images hadn't seen ink yet, so I got jiggy with it. Here are some of the results.

This gift set is for a friend who enjoys tea. Cutting the tea time label out of a scrap of celery was easy, and I used a scrap of wild wasabi for the band. I love wild wasabi (especially paired with celery for a monochromatic combo) and am thrilled it's coming back. The leaves on the tea pot are from Turning a New Leaf. 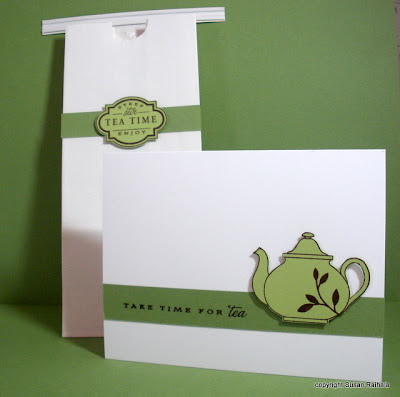 Then, in keeping with CAS67, I made a shabby chic, yet still clean and simple, card with a bit of green velvet ribbon. The colors are a bit brighter in real life than in the photo. The script, button, and pearls on the punched circle are all purple, while the tea pot and stamped circle are mellow moss. The base is PTI vintage cream. 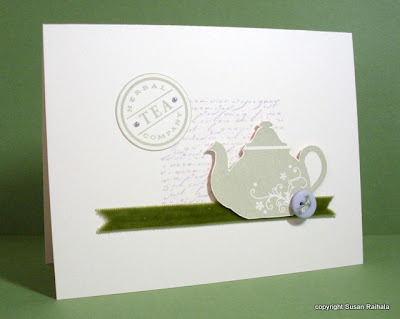 Ever since I started this blog, I've thought a lot about my creative philosophy. What makes me obsess with rubber and ink and paper? Why is it so satisfying? What do I have to say with my creations? I do have a few ideas to share that I've ruminated on, like a cow chewing cud rather than Plato contemplating the cave. What was up with the cave anyway? I never understood Plato: one of my many intellectual failings. Don't worry, though. I'm not beating myself up over that inadequacy. And we're talking about stamping, not whatever Plato was talking about, which wasn't nearly as interesting as stamping, I'm sure.

First, creative endeavor should be fun. Otherwise, what is the point? George, my dear husband, taught me this years ago, not long after I began stamping, when I tried to make 60 Christmas cards all with the same design. It was a hellish nightmare of tediousness that almost moved me to tears. In the middle of it all, I wailed to him, "This is sooooo BORING!!!!!!!!!" He replied, quite reasonably, "So why do it?" I whined, "Because I've already cut all the paper." He said, "So? If it's not fun, don't do it."

The sun came out, bluebirds sang, and I stopped making those cards right then and there. I bought my cards at Hallmark that year and was ever so happy about it. Ever since, any time I'm not having fun in my craft room (which doesn't happen often), I get up and walk away.

Second, express yourself as the unique individual you are. Don't be afraid to try new things, like my kraft week with Mary Dawn, but don't try to be someone you're not. I'm not an embellisher or layerer. I'm not into vintage, distressed, or collage, except as you can adapt these to CAS, as I did above. I am not a technique junkie either. If it isn't quick, I'm not interested. I'm all about clean lines, white space, and simplicity. I'm classic, not trendy, but I pay attention to trends and will adapt them to my style when I can.

There was a thread on SCS recently asking people to list trends they like and trends they don't. It's fun reading, but when I got to Krystie Lee's post and read that she can't stand ticket punches, I yelled, "GET OUT!" I LOVE my ticket punch! I also LOVE Krystie's work. But her loathing the ticket punch doesn't mean I'm wrong to love mine. It just means we're not the same person. I'm sure she's relieved about this.

Third, inspiration is everywhere. I enjoy looking at art that I would never in a million years make and I know what the trends are, even if I don't jump on their bandwagons. It doesn't upset me to buy a magazine and find that there isn't anything CAS in it. I look for inspiration anywhere and everywhere BECAUSE OTHER PEOPLE ARE EXPRESSING THEMSELVES, TOO. They express themselves in print advertisements, magazine covers, billboards, packaging, dishes, clothing, and architecture. They are not me, so their art is different. And that's the way it should be. But their self-expression can inspire mine if I'm looking at it right.

Fourth, don't forget opportunity costs. When you choose one thing, you're simultaneously excluding other things. Works for economics and for stamping. I choose to buy a bazillion stamps and not to buy some of the more expensive tools of stamping, such as Copic markers and die cut machines. This means that a lot of what I see on blogs and in the gallery at SCS and in magazines is fruit dangling on the branch I can't reach. AND THAT'S OKAY.

I'm not a bad person because I don't have nesties. And someone who does spend tons of money on every nestie ever made isn't a bad person either (unless they use their kids' college fund, but that's another topic, LOL). We're just all making different choices, and as long as we enjoy making our art, it's all good.

Fifth, we are making art. It might not always be good art, in the sense that good art communicates effectively to lots of other people a worthwhile message in a technically skilled way. Think Leonardo da Vinci's Mona Lisa or Michelangelo's David. But we're undeniably making art, and we are artists. Don't let anyone tell you otherwise.

And that's my manifesto. For now. What's yours?

PS Losties, I'll be posting on Questioning my Intelligence later today. Click on over and let me know what you think about last night's ending.

Posted by Susan Raihala at 6:30 AM

Email ThisBlogThis!Share to TwitterShare to FacebookShare to Pinterest
Labels: Stamps by Papertrey