Those of you who read my other blog know I am a word nerd. Since words are made up of letters, I am also rather fond of the alphabet. The last card I remember making that featured the alphabet was this one. I like today's 5" x 7" card even better. 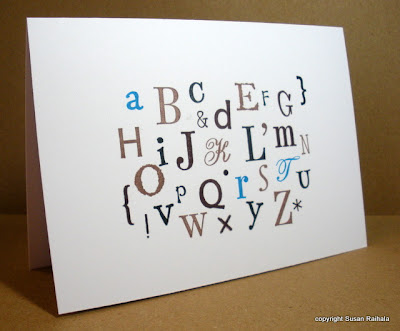 The idea for this card came from a picture of a wall with a random alphabet collage on it. I thought the picture was on Marta's Pinterest boards, but now I can't find it. Whatever. I wouldn't have made this card without seeing that picture, wherever in cyberspace it is.
I'm just not that clever. So thanks to some clever decorator, I made this card.

Edited to add: Thanks to reader Malyn, I can now give the link to the inspiration photo. Thanks, Malyn!

First, I pulled out a bunch of aphabet stamp sets. Sadly, this represents less than a third of my total alphabet sets. I know, I know. I have a problem. I. Don't. Care. Because if I didn't have such an awesome selection, I couldn't have made this card. So there.

Second, I said a prayer and started stamping. I wanted to put a word in my alphabet collage, and art seemed appropriate. Color is the only defining element for the word: art is in Bahama blue (Memento), and the rest of the letters are black, dark brown, and tan, which I tried to arrange as randomly as possible while still holding true to alphabet order.

Finally, I added punctuation because there was a little awkwardness in my random placement. The punctuation filled in the holes, so to speak, and made the whole composition more balanced.

Yes, I was an English teacher. Why do you ask?

In other news, I just noticed that Simplicity has 499 followers. About a month ago, it passed 1,000 email subscribers. March 20th is my two-year blog anniversary.

Put these random facts together, and clearly we need to celebrate. Oh, yeah.