Geeking out with Colored Cardstock

Seeing the yummy, yummy colors of cardstock in the A Muse catalog made me feel really bad. I have a ton of cardstock already...more cardstock than a woman could use up in a decade of obsession.

Also, let me point out that there is absolutely nothing wrong with the cardstock I've collected. I only have top-quality cardstock. Period. I learned years ago that cheap cardstock makes cheap-looking cards. I'm just falling victim to the powerful force of wanting something cool that I don't have. Don't judge me. You're guilty of it, too.

Anyway, I decided that if I really want to buy and use some of those fab new-to-me cardstocks in this lifetime, I need to start using the colored cardstock that I have. And of course, given my mental tendencies, I have to overthink it and try to come up with a system, a formula, a foreign policy of sorts for embracing a supply that, let's face it, I've neglected for years.

The result of this overthinking is Susan's First Theory of Using Colored Cardstock on CAS Cards.

I told you I was geeking out in the title of this post.

So, what's the CASest thing you can do with color? Monochromatic schemes, of course. So the First Theory states that the card base should be a light shade, the matte should be a darker shade of the same color, and the stamped panel should be white. The stamping should be simple, with a sentiment stamped in either dark brown or black, depending on what looks best with the color you choose. 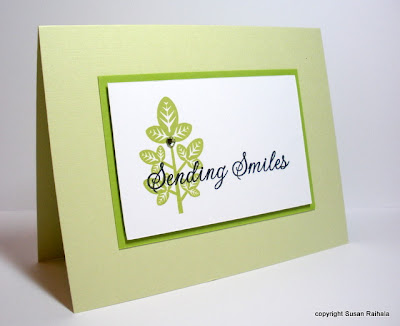 Not really. Bling is necessary.

I made four of these in record time. Well, I made two with this sentiment and two with a Thank you sentiment because I just had to vary them somehow.

You'll be seeing more examples of the First Theory in the coming weeks. Because seriously, I'm geeking. I expect I'll also have to come up with a Second Theory eventually...because otherwise what's the point of having a first theory?