Some people are not pet people. When my husband's boss--a perfectly nice person in all other respects--found out we had to pay big bucks to get Daisy's knees fixed, he asked why we didn't just get another dog.

Like I said, some people are not pet people. This card is not for those people. In fact, it's for my aunt and uncle, two pet people if there ever were any, who recently had to put two elderly dogs to sleep within two weeks of each other. 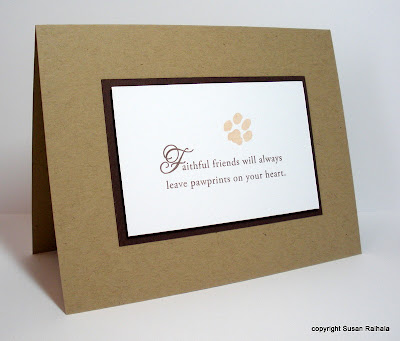 For those of you who have followed my other blog for a while, you know how devastated we were when our golden retriever Hoover passed away from cancer last year. I remember how comforting it was to receive cards from so many of you, and even though I've sent pet sympathy cards before, this time I truly know how comforting and appreciated they can be.

These stamps are from a mini set from Papertrey Ink. That single paw print says it all, I think.

Several people have asked how I got such a good image of the silhouette stamps from Hero Arts' Greatest Gift set on yesterday's card. Here are some tips for getting good images with solid stamps.

1. Experiment when the stamps are new. Sometimes, clear and rubber stamps have a residue on their surface that makes even thicker inks like Memento bead on their surface. A simple white eraser can remove the residue and make the surface accept the ink better. Rub vigorously with the white eraser; then clean the stamp well. Rubber stamps generally will work nicely with any quality-brand ink after conditioning.

2. On the other hand, some inks just won't work well with clear stamps, no matter how you condition the stamp. Clear stamps work best with thicker inks: Brilliance, VersaColor, VersaMagic, VersaFine, Colorbox pigment, and SU craft ink all work well with clear stamps, although I don't like the blacks for any of those brands. (My favorite blacks are Palette noir and Memento tuxedo black. The Palette stains, though, which isn't a problem for me but some people don't like that. Lots of people like VersaFine black as well, but it has not become my go-to black.)

3. If you're having trouble with SU classic ink beading on stamps, ink the stamp in VersaMark ink (which is clear) and then SU ink. It works great!

4. If you stamp a block image in black ink, and it's blotchy, you can take a black marker and fill it in. I had to do that with the shepherds on the left of this card because I didn't condition the stamp before using it, and as that was the last thing I stamped on that scene, I was pretty miffed at myself for not having checked the stamp first. But I pulled out a black marker, filled in the blotches, and no one is the wiser.

Or no one was.

Until I just told the entire internet.

This filling-in tip hasn't worked with other colors, even when I have the matching brand marker. Not sure why, but for me the corrected image always looks doctored in any color other than black.

5. Don't underestimate the ickiness of a poorly inked pad. If you're not getting good results, the problem may very well be the pad. Pads can be over-inked or under-inked, either of which can cause problems. If a pad is over-inked, take a clean paper towel (Bounty is best because it doesn't leave lint) and blot the pad until it works well. If the pad is under-inked, either buy a reinker and add ink, or buy a new pad.

6. If you're still having issues, the problem may be the paper. Which leads me to harp on the fact that buying quality paper is critical if you want to make quality cards. The cheap stuff from Michael's or Hobby Lobby or JoAnn's is, well, cheap. There are LOTS of high-quality cardstocks out there, and if you want to know my preferences, I'll be adding my findings to my Favorite Products tab in the next week or two.

And that's all I know about stamping solid block images.

BTW, I thought I'd already posted my musings on paper on the Favorite Products tab, but apparently not. Where is my head? I've forgotten where I put it. Anyway, I did a search and found an old post from 2009 on cardstock that is out of date for my paper-use habits, which have evolved a bit since then. I have some to add to the list, so don't take that old post as the Cardstock Policy According to LateBlossom.

I don't have a Cardstock Policy unless is it to try what looks good, keep what does, and collect as much as possible before I die so I win.

I imagine a lot of you can relate.

Also, thank you all for your comments on my question about holiday stamps. It was a very interesting discussion!

Email ThisBlogThis!Share to TwitterShare to FacebookShare to Pinterest
Labels: For sympathy, Product Discussion, Stamps by Papertrey, Tutorials and Techniques