When Failure Wins, and My Latest PTI Order

After picking up the latest issue of Take Ten at my local Barnes and Noble (where they know me by name, by the way), I decided to take a break from my self-imposed 2-cards-per-set Christmas challenge and do a CASification (clean-and-simplification) of a published card.

I like getting out of my comfort zone every now and then...it adds zest to life, you know. So I found a great card that used elements I never would use on my own and made my CAS version of it, which was hideous beyond belief.

I don't know who made my card because it wasn't me and if I posted it here, at least a few of you would email me about how totally disappointed you were that I would post such an un-Lateblossom card.

And I would agree with you.

Since I had my Rubber Stampede cardinal stamp out already, I flexed back to my Christmas card challenge and made not two but three cards that are DEFINITELY BY LATEBLOSSOM.

And all was right in my world. 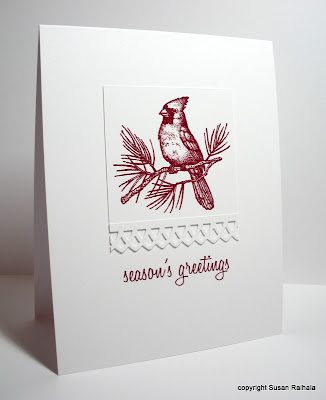 Cherry cobbler isn't exactly a cardinal red, but I took creative license. It definitely wasn't because the cherry cobbler pad was out on my desk and I was too lazy to open a drawer and pull out real red. No, I'm not lazy like that. *stares at ceiling, whistling*

Simple cards need something vaguely unexpected but oh-so-right to keep them from being boring, and using a non-cardinal red certainly qualifies. Above, I used the Martha Stewart lattice border punch to create a lace-like border. That punch hints at pretty garden fencing, or perhaps a gazebo, for the landscape of our cardinal on a pine branch. 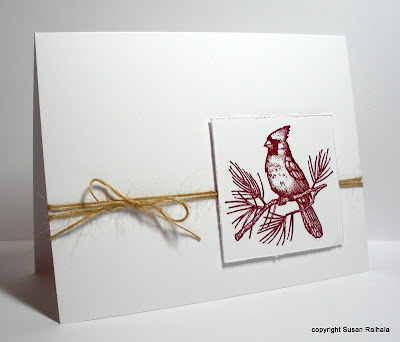 Y'all know how I feel about distressing. I'm a firstborn pleaser who doesn't want to distress anyone or anything, but occasionally, accidents happen. This stamped panel got roughed up by a pair of dull scissors (okay, not by accident), but by pairing it with wrapped fuzzy twine, the distressing makes sense and enhances the unity of the simple design. 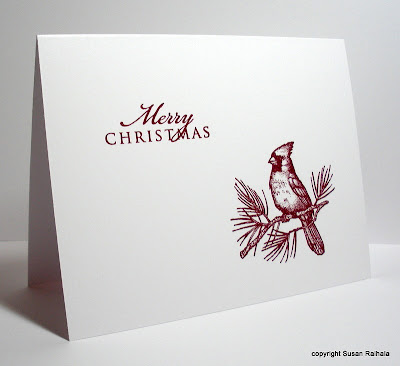 Finally, I went uber-simple, because it was getting late and I was tired. Not sure I like this one as much as the other two, though. The cardinal is looking at the sentiment, which is a nice design touch, but he and the sentiment are just hanging in space, which generally isn't such good design. It needs something...maybe bling. But it's flat, easy to mail, and festive, nevertheless.

And now for an awkward segue to another topic...

Get ready for it. My sister-in-law gave me a $100 gift certificate to Papertrey Ink for my birthday.

Have I mentioned lately how wonderful my sister-in-law is? No? Well, she is. Spectacularly wonderful.

Here's what I ordered yesterday:

I'll be happier when the box arrives. What fun times we'll have with such goodness!
Posted by Susan Raihala at 9:05 PM