Since Duke lost early in the tournament (and it was ALL MY FAULT*), I'm ignoring the swishing going on in b-ball, but here's a swish from an old, discontinued (so sad) Hero Arts shadow set. 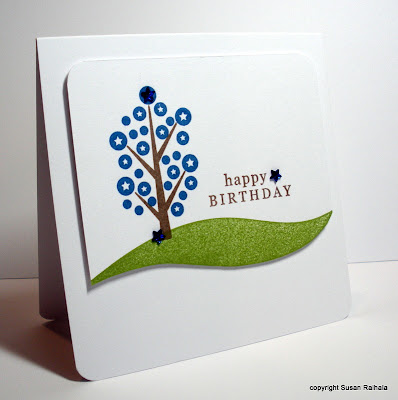 The tree is from PTI's Tree Tops, and the stars seemed appropriate for a birthday card (sentiment from Limitless Labels, I think). Also, I dug out my star-shaped blings and made a triangle of them. Angles love curves, apparently.

And yes, the photo is a tad over-exposed, but I cut the stamped panel out along the swish on bottom and rounded both top corners. Then, the panel was popped on dimensionals.

If you're looking for a challenge, try using a curvy shape as grass and cutting your panel as I have done. It's fun!


*I graduated from Duke in December 1987, and every time I watch my team play basketball, they lose. On March 16, I turned my television on and by pure bad luck, Duke was playing Lehigh.  I swear I didn't even know they were supposed to be playing!!!! I wanted to watch The Big Bang Theory. But there it was...Duke ahead by two. As soon as I realized what I was watching, I changed the channel. But it was too late. Once again, I killed Coach K's dream. *insert swear word here*
Posted by Susan Raihala at 8:37 PM