Thanks for the warm response to Wednesday night's post. My apologies this one is late.

And no, Joyce, I am not kidding about standing on your big stamps. I actually prefer it to the inking-rubber-side-up method because it gets me moving and practicing balance. *snort*

Carol Duvall demonstrated standing on big stamps years ago, at a time when I was horribly frustrated by poor impressions and ruined card stock. My craft room had a carpeted floor, so I took a 12"-square piece of smooth plywood I'd had cut for an improvised book press, and used that to support the card stock. Worked beautifully, and I've done it ever since.

The other method came to my attention via some thread on SCS. It's slightly more time-consuming and can be prone to error if you don't rub the entire stamp well, but otherwise it's just as effective as standing. Someone suggested using a brayer to do the rubbing, which sounds like a great idea.

As for inking large stamps...I've read at SCS that some people use brayers to ink the stamps, but I've never really liked brayers all that much. I ink large stamps by placing them on the table rubber-side-up and holding the pad upside down. I get all obsessive about coverage (does that shock you? you must be new here) and tap the pads over the rubber repeatedly. It takes longer, but the little dew drop pads are easier to ink with than big SU felt pads, which I find sometimes don't give as good coverage for big stamps due to bowing of the felt...even on well-inked pads. I wonder if the new SU pads will work better, but the tiny pads give good control.

Enough chit-chat. Let's get to the card. 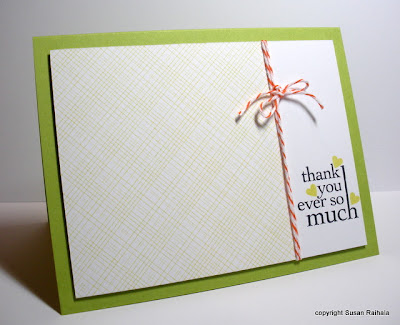 Yesterday's card showed the most obvious use of large stamps...all-over backgrounds. Today's card shows how you can use it for part of the background. I inked the stamp and then placed it so it would leave clean space on the right of the scrap of paper.

I should have taken a picture before I added the green hearts. The card didn't look at all unified until those three went down. The green hearts around the sentiment carry the green color over the baker's twine and help relate the two parts of the card. They also make three elements (hearts, envelope pattern, and card base) green. Three is a very good number.

Color is often a major contributor to a card's unity, so if you're working on a design and it's not coming together, think about how repeating color can help.