Random Responses and an Inspiring Link

If you haven't read all the comments on yesterday's post, please go do so. LOTS of great advice there.

There were also a few questions, so let's address them.

1. Shawn asked for purging advice, especially for embellishments and designer paper. I could write a book, but the short answer is this.

Purging Advice I've Blogged before But Is Worth Repeating

Step 1: Load all the stuff you think you might like to get rid of into a cardboard box or boxes.

Step 2: Label the box with a date six months to a year from the day you loaded it.

Step 3: Store the box as far away from your craft space as you can. (If the box includes stamps, make sure it's a climate-controlled space as excessive heat can ruin the stamps.)

Step 4: After that date on the box, go through the box again and pull whatever you still can't bear to part with, or simply take the box, unopened, to Salvation Army. (IF you want to claim a deduction on your taxes for the donation, make sure you create an itemized inventory and get a receipt with the date of the donation.)

If you want to sell your stuff, that's trickier. In the grab boxes of stamps I sell (which are really good deals, by the way...everyone who's bought one says so!), I included the DP, embellishments, and card stock I want to get rid of. In my upcoming sale, there will be a LOT less of that stuff, because so much of it is gone already.

Donating DP and embellishments that aren't choking hazards to churches, preschools, or elementary schools is a great idea. The choking hazards can go to art departments in higher grades.

Hope that helps, Shawn. It's still a pain in the butt to purge, though. I can't fix that. But you'll feel better once it's finished. I promise!

2. Christi suggested setting up a stamp swap. This would be a great idea and lots of fun for people who know each other in real life and trust each other. I see huge potential for some unsavory character to take advantage, though.

4. Beth is preparing for another PCS. For you civilians out there, PCS stands for Permanent Change of Station, which is a bit oxymoronic because there is nothing permanent about a PCS...we did eight of them in George's 20 years in the Air Force. A PCS is (generally) longer than a TDY, or Temporary Duty. You get to take your family along when you PCS, but they (again, generally) stay behind when you go TDY.  So, since Beth is preparing for a PCS, that means the lowest bidder on the military moving contract will be moving her stuff, and she's in for a major headache. Been there, done that, Beth, and God be with you.

Thank you for your service to our country.

5. Ginny sent me a link to a really cool blog. Colette Copeland would be a great person to meet for tea if you live in Toronto. If you're like me and don't live in Toronto, however, you can settle for making yourself a cup of tea and spending some time poking around her gorgeous and very inspiring blog. Her style is artistic and refreshing. What a wonderful source of inspiration!

And now after all these words, I owe you a card. Sadly, this is my last card to share, and it's not particularly stellar. I simply must make some time to stamp and SOON. 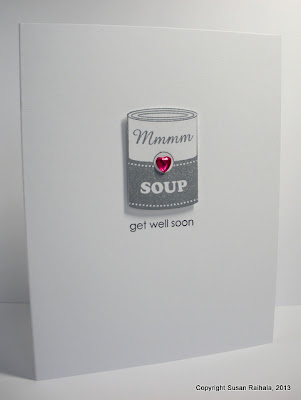