New Stamps, Other Weirdness, and a Question

When family asks what I want for Christmas, I generally ask for cash to spend on stamps in the coming year. Here's my first 2016 order from Hero Arts. 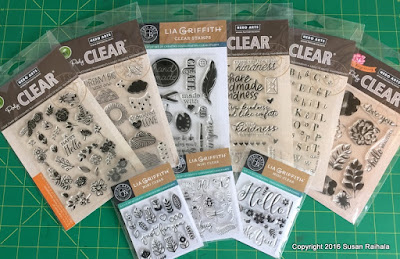 Some sets are from Hero's new release; others are older. I played with the layering set on the far right first and felt like throwing it in the trash. Not good. (I've had no problems with the butterfly layering set, but this floral one defeated my ability to line the layers up AT ALL.)

Playing with the other sets, however, has indeed been fun and worthwhile.

Consider that alphabet set. It's been around for forever. It has upper- and lower-case stamps of a font similar to (or perhaps identical to) Times New Roman, plus a cursive lower-case font. How cool!

My niece is attending a special high school for the arts, where she is studying ballet and writing. She's gifted in both. Now, my ballet skills are nil; my sister was the professional ballerina. But writing. THAT I understand. So I made this card to encourage her. 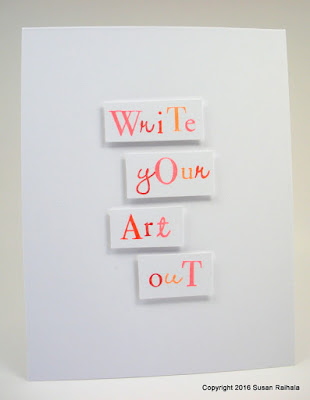 The funky combination of letters, the pinks and oranges, the hand-cut words...loose and fun and young.

Now for the weirdness.

Yesterday (Saturday) I was rear-ended for the third time in just over 18 months. In all three accidents, I was at a complete stop when hit by someone not paying attention behind me. This third accident was the worst. I'd signaled and stopped for a funeral procession, as had the car in front of me. The woman coming up behind wasn't paying attention and plowed into me doing probably 50 MPH. I saw her coming in my rear-view mirror and tensed for the impact, so I'm a bit sore today. Our son Jack was with me, and he is fine. He was, in fact, a complete trooper through the whole experience.

The woman who hit us, however, was transported to the hospital. I have no idea how she is doing and hope to get some information tomorrow. She didn't appear seriously injured, but she complained of chest pain...what she described as feeling bruised on her chest, from the air bag. If you're the praying kind, please say a prayer for her.

My car isn't drivable, mainly because of damage to the muffler (smashed into the rear left tire) and tail lights (hanging by wires in the air). It will, of course, need a third new bumper. My mom asked if I was going to get rid of the car, which is a Mazda CX-9, and I responded that the car kept us injury-free through three accidents, so no. We're not getting rid of it. Then she suggested that I take the target off the back of it, and I said I'd consider that.

A friend suggested that my "magnetic personality" was causing the accidents. I seriously need to turn it down, don't I?

Let's consider for a moment why I stopped in the first place. I grew up in the American South, where the tradition of stopping for funeral processions lives strong. Showing respect for the dead and honoring the family's grief feel second-nature to me and not to stop would feel incredibly disrespectful and callous. I still remember watching a man in his yard stop and cover his heart while my grandmother's funeral procession passed his house in Shelby, North Carolina. I so appreciated his respect.

My husband, however, had never seen this until he moved to Charlotte, North Carolina, and thinks it's unnecessary and dangerous. On Saturday, he was proved right, at least on the "dangerous" part.

Here in Ohio, given that there's a huge cemetery near our home, we see the tradition often, and George always complains about it. On Saturday, the person in front of me had stopped, so I didn't have a choice. It felt right and good...until I saw the Toyota barreling up behind me.

Is this tradition of stopping for funeral processions common where you are? How do you feel about it? Just curious.

Posted by Susan Raihala at 5:42 PM