Can Mixed Media and CAS Live Happily Ever After?

Long, rambling, discursive answer:
So, ever since I settled on a screen name of LateBlossom at SplitcoastStampers, I've been fully committed to clean-and-simple (CAS) stamping. Sure, I occasionally dabble in collage or shabby chic styles because, you know, it's fun to get outside your box and play every now and then. But clean and simple is my box, and I love my box. My box makes me happy. It's a very good box for me.

Collage and shabby chic get along nicely with CAS on quick playdates, but you don't really need a whole lot of special supplies to make those playdates work. A bit of ribbon or lace, a charm, a scrap of fabric, a button or two...nothing special. Stuff the average crafter has lying around on principle.

Mixed media is a whole different critter. Every time I poke my nose into it, I pull away in shock and horror at the cost. What if I pay $50-$75 on a few different pastes and paints and tools, and end up hating it? Then I'd also hate myself for not spending that money on stamps and ink I know I'll love.

Even worse, what if I love it? Ohmygosh! My obsessively acquisitive self would have to buy some of everything. My kid's going to college next year. I can't afford that.

The kit I won a week ago fixed that problem of initial investment, and I've been playing around with it to see if a buying spree is in my future. The jury is still out on that, but my first card is a pretty cool union of CAS and mixed media. 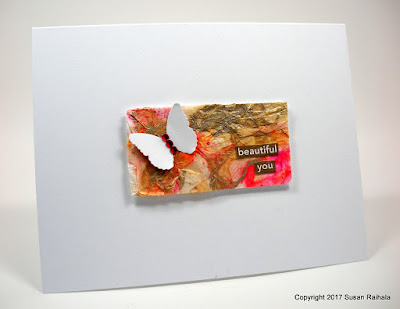 Mixed media is all about layers, texture, and color. CAS is all about minimalism and white space. My strategy going into this was to create smallish focal points of intense texture and mat them onto cards of white. As I used the Force to feel my way toward something that didn't look silly, it dawned on me that bringing elements of white into the design would have a unifying effect.

To make this card, I took a small scrap of cardstock and covered it in gel medium and crumpled up white tissue paper on it, adding gel medium to get all the folds (or at least most of them) to stick down. This was messy, and there was plenty of tissue hanging off the cardstock, but I left it there.

After it was dry, I painted on pink, orange, and gold metallic Gelatos that I'd prepared with a bit of water on a palette. I let each color dry before adding another so they wouldn't blend too much and make mud. The Gelatos can stay sort of lumpy and thick as watercolor, which can add more dimension and interest to the final product. 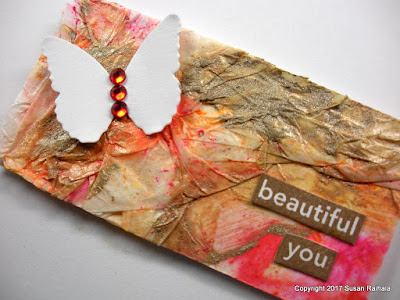 After the coloring was done and dry, I trimmed all the extra tissue off the cardstock scrap with scissors and spent an inordinate amount of time trying to decide what to do with this little background. After much hemming and hawing, I settled on a simple white butterfly with bling and a couple of words from an old StampinUp set.

And there you have it. My first official foray into mixed media.

Not too shabby, eh? I'm pleased, and hope you are, too.

But as for happily ever after? That remains to be seen.