Normally minimalist in my tendencies, I got a tad carried away with coloring these beautiful old PSX images, using a ridiculous number of Copics here, but the results...well, they are satisfying. 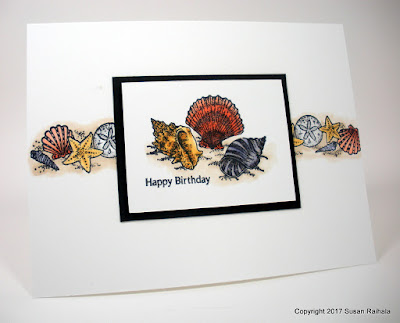 There are two shell stamps on this card: a two-inch-wide border stamp and a trio of shells. My preferred color scheme for beachy cards is pale blues and greens and browns. This card got much more colorful.

In fact, several shells went through color changes. If the purplish shell below looks odd, it's because it started in warm grays and went pinkish and turned out (finally) purple. 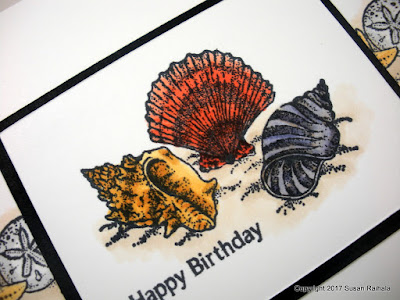 Indecision may or may not be my problem.

Still, it's enormously satisfying to finish a card like this. It has me longing for gentle waves and sea birds and salty air.

Did I ever tell the story of my Lamaze class? Pretty sure I have, but what the hay, let's tell it again.

Our teacher told us to practice our "hee, hee, hee" breathing while imagining our happy place.The happy place I settled on was a gentle, white-sand North Carolina beach as the sun rose. To complete the scene, a bagpiper in full Highland dress, standing on a boardwalk, played to the rising sun.

I'd experienced this incredible scene years before and ne'er forgot what peace it brought me. All through the Lamaze practice sessions, I envisioned this scene and felt immediately peaceful and relaxed.

What they don't tell you in Lamaze is that contractions really involve your whole uterus, which at nine months gestation is roughly the size of a giant beach ball. As many of you already know, the whole giant thing contracts to push that baby out.

That's a b-i-g pain. Much bigger than my feeble imagination, aided by weeks of feeble little Braxton Hicks contractions, could handle. In actual labor, I couldn't picture my piper on the beach with gentle waves. Oh, no. I pictured the Pacific coast, south of Stinson, where jagged rocks shoot up and waves crash violently against them.

Highland piper, where were you when I needed you?

Anyway, this story may or may not have become embellished over the years since that terrible realization that Lamaze is inadequate to the task of childbirth (at least for wimpy me), and that my OB had been correct. The best pain management during childbirth is "hee, hee, epidural."

All hail the Epidural Man!

By the way, the sea shells and sand dollars on my card would have been pulverized into mulch on that rocky Pacific shore.

Perhaps I should stop now.