As promised, a thank-you card using StampinUp's Endless Thanks...with more than yesterday's card had on it. 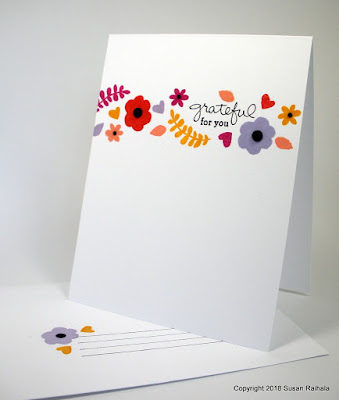 Endless Thanks has a cute collection of tiny stamps to use as accents with all the sentiments, so I decided to use ALL of them on one card. Tiny stamps sprinkled randomly over a tightly defined area give a pleasing effect, especially if you aim to create vague visual triangles with the colors. Note that the triangles are irregular, and not all colors form them...just most.

Note also that you could draw a light pencil line to keep your stamping straight, but I eyeballed it.

The color combination was loosely inspired by this pin, with variations to accommodate the ink colors I had. I love the combination of cool and warm colors. 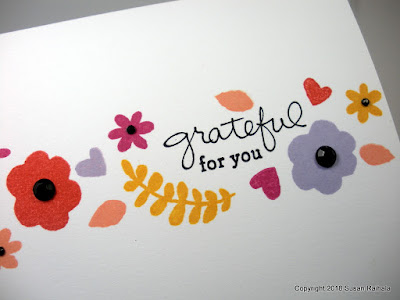 The bling became a way to reinforce the randomness-with-order structure of the design. There are only two large rhinestones (no visual triangle, unless you count the sentiment as a large black spot, which might be stretching it). Then, there are three small rhinestones (visual triangle...yay!). If I'm doing the math correctly, that makes five total rhinestones, a pleasingly odd number.

I made a third card with this set but don't like it so I will not share it. As one of George's B-1 instructors used to say, in a VERY southern accent, "It was a good idea that shouldn't have seen the light of day."