If you're interested in my early career as a military spouse, read past the chit chat about the card on this post. If you're not interested, just look at the pretty background on today's card. 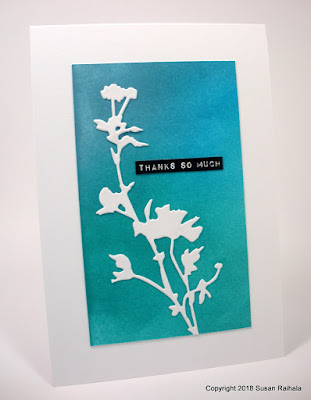 One of the easiest things to do with ink is make a pretty background with Tim Holtz Distress Inks and inking tool. Just keep adding color until it's pretty, then cut out the prettiest part to use on a card. Layer a die cut over it, add a sentiment, and Bob's your uncle. 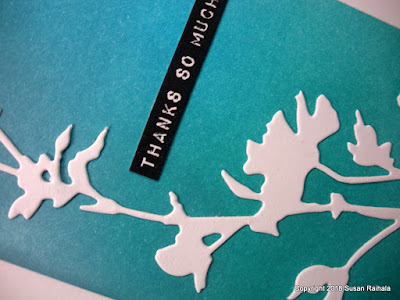 These dies are Tim Holtz from my Hobby Lobby spree a few weeks back. So pretty in white, don't you think?

Perhaps I need to come up with another adjective than pretty?

And that's all I have to say about the card.

I had an amazing weekend going back to a place I once vowed never to set foot on again: Wurtsmith Air Force Base. It was not my favorite place George was stationed in his 20 years of active duty.

In fact, it was my least favorite place he was ever stationed.

But the people we knew back then in that place were stellar humans who went through a lot with us (including the Persian Gulf war). I love those people, and a bunch of them gathered for a reunion this weekend, which also happened to be the 25th anniversary of the closing of Wurtsmith Air Force Base. (Another reason I thought I'd never set foot there again!)

George was an Electronic Warfare Officer on the B-52 in the 524th Bomb Squadron, and all his old crew showed up for the reunion. R-36 was the only crew, in fact, with full attendance and all accompanied by their wives. Not one of these stubborn men has gotten a divorce. It was pretty surprising given that many of our friends have gotten divorced over the years.

What are the odds that these six crew members would still be married to the wives they had 25 years ago when they were young and had more hair and fewer wrinkles?


The women in this picture kept each other sane through some crazy times, and I suspect it's due to their competence (and tolerance of aviator types) that kept these six marriages working. We supported each other, cared for each other, fed each other, and basically became a family as our guys flew difficult missions, sat nuclear alert, deployed, went TDY to Key West and broke their jet and spent two weeks on sailboats while we wives were shoveling two feet of lake-effect snow in Oscoda, Michigan, in January.

I'm not bitter about that last one.

Well, maybe I am. A little.

It was long ago. A sensible person would let it go.

Perhaps I'm not a sensible as I thought I was.

Anyway, we had a BLAST this weekend catching up with these and other friends from back in the day. People were talking with their hands (if you've been around aviators, you know about this), saying things like "remember when" a lot, and laughing. We wives had a chance to thank Shane the copilot once again for saving our husbands' lives (long story).

What a treat to be with people who affected our lives so powerfully so long ago. I suspect many of you have had similar experiences at reunions of various sorts. I've never attended a high school or college reunion, but this...this was a family reunion. And it was special.

Thanks for indulging my enthusiastic nostalgia! I hope your weekend was glorious, too!