I felt a momentary impulse toward political correctness when I typed the title to this post and replaced snowmen with snowpersons. Does anyone else in the world think about these sorts of things?

Anyway, today we're looking at two different snowperson cards made with basically the same layout. One works much better than the other, but I'll be darned if I care because this snowperson stamp from Hero Arts is so wonderfully, perfectly adorable that it could be stamped on my forehead and it would make me happy.

First, the card that works. Isn't it cute? The glittery snow is adhered with a sheet of red tape that I cut to fit on the card. I cut the hills freehand with a craft knife. Getting that piece stuck down in the right place first time was tough. 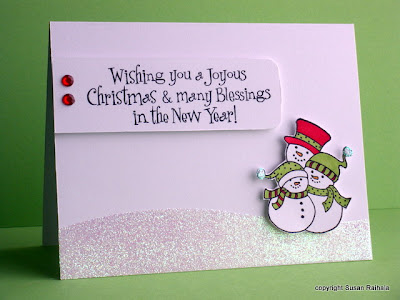 After I got the snow base and the cutout snowmen attached, I stamped the sentiment and it looked HORRIBLE. No worries...there are no mistakes in stamping, only opportunities for embellishment. Hence the popped panel (took four attempts to get that senmtiment stamped nicely) and couple of rhinestones.

Simplicity Tip: You should know that I hate working with loose glitter. The AR/OCD side of my personality gets highly annoyed with glitter that doesn't stay where I want it, and I've experimented (and spent money on) every known adhesive in an ink pad, bottle, pen, roll, etc. The red tape (in sheets or rolls) holds loose glitter better than any other product I've used. Very little rubs off if you smoosh the glitter into it and thump the excess off firmly. But it's hard to punch and a pain to freehand cut (you CAN stamp on the backing and cut out an image and piece the adhesive onto your image, but I'll not be responsible for the foul language you'll mutter as you do so). The glitter on the two hats is attached with a Quickie Glue Pen, which is the second-best adhesive for glitter I've worked with and the only option for putting a bit of bling on only a part of a stamped image. 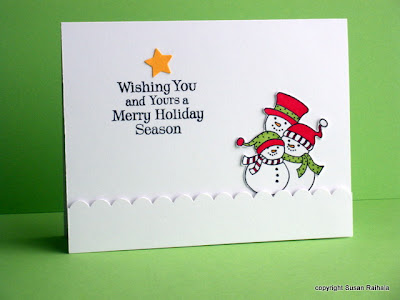 Now the card that doesn't quite work. It's just not balanced. That star, made of summer sun cardstock, is too, too powerful for the rest of the card, and the snow, which is just a white cs panel punched with SU's scallop border punch, lacks color to balance it. A great idea, I think, but not on this card after I added that yellow star. To balance this card, I really ought to put some yellow rhinestones on the snow scallops, but as anyone who's experienced snow knows, yellow snow is not socially acceptable. Ewwww. Conclusion: I should have left the star off.

Oh, well, it's still a cute card. Aren't those snowpersons just the cutest?

Email ThisBlogThis!Share to TwitterShare to FacebookShare to Pinterest
Labels: For Christmas, Stamps by Hero Arts