I ordered PTI's Fall Elegance early last week, and Monday I started making cards with it. After just a few hours, I realized I had used every single image in the set...with little effort on any of the cards except one of them. OH. MY. GOSH. I am totally in love. Here are the one-layer cards that came from my initial flurry of activity. This set is going to get LOTS of use! 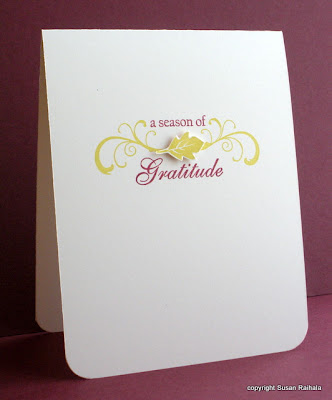 The first card I made was the first idea that popped into my head. The colors are split pea and burgundy (VersaColor). I cut out and popped the leaf. Happy sigh. 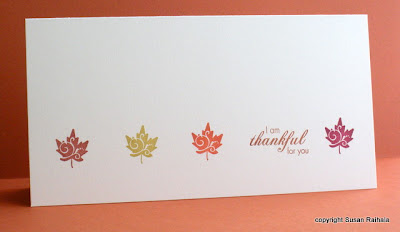 Our next card looks deceptively simple, but it's not at all what I wanted. Placement of the leaves is critical, and I dorked it up. The burgundy leaf on the far right is a smidge too close to the sentiment. I had intended to put rhinestones between the leaves, but if I had, the smidge would have looked really bad. So I left the card totally plain, and the difference isn't nearly so obvious. 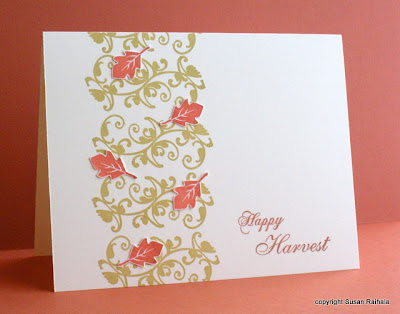 The lattice stamp in this set had me baffled at first, so I stamped it out repeatedly vertically and horizontally on scrap paper. It looks fabulous either way. For this card, I cut out all the leaves and simply glued them down after experimenting with placement for a bit. Thought about popping them, which would look great, I think, but finally decided to go for flat and easy to mail. 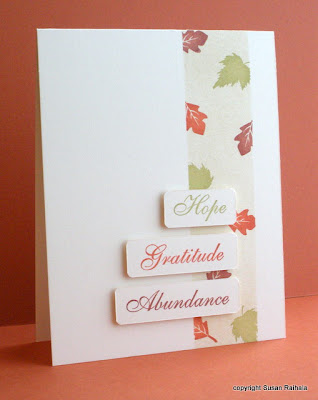 The border on this card was created using posti-its to mask, stippling Memories wheat ink, then stamping the leaves in various Versacolor inks. My original plan was to draw lines with a gold pen down the edges of the border, but I decided against it. Not sure why, but the simpler approach just made me happy. I used my scallop scissors (how wrongly maligned those things are!) and snipped the corners off the word pieces to give an overall softer, more finished effect. 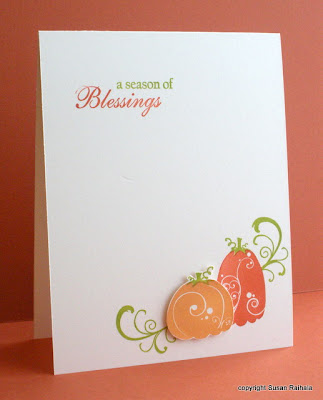 Finally, my favorite of the lot. This card took three tries to get right, mainly because I stamped the "a season of" crooked (the very last thing I did!) on the first card, and then botched the masking of the tall pumpkin on the second. Arrgghhhh. Third time turned out just like I wanted. I popped the short pumpkin, masked the tall one to stamp the vine coming from behind it, and used my gridded acrylic block to finally get the sentiment right. (I did stamp that FIRST on this card; I try to learn from my mistakes....)

Hope you enjoyed these CAS and OLC cards! I have a few more cards from this flurry of Fall Elegance to post later. They aren't OLC's, but they are very simple, nevertheless.

Posted by Susan Raihala at 7:15 AM

Email ThisBlogThis!Share to TwitterShare to FacebookShare to Pinterest
Labels: For Seasons, Stamps by Papertrey, Variations on a Theme