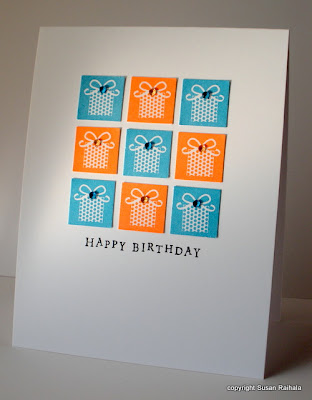 I was messing around this weekend trying to make some cards with the SU In Color markers and paper. THAT was an exercise in frustration. So I put them all away and pulled out PTI's Sign Language.

After a bit, I decided that the actual sign in Sign Language is sort of awkward for me so I abandoned it for the time being. Since my mojo wasn't flowing, I decided to fall back on a nice, safe grid layout.

I chose the colors thinking it was a fun and happy combo for a child's card and knowing I had rhinestones in both colors. These squares punch perfectly with a 3/4" punch, and I glued them down rather than pop them up because the rhinestones would add bulk, too, and I wanted it mailable.

The sentiment is part of a Hero Arts stamp that says Happy Birthday to you. I wanted it to be smaller than the width of the grid, though, so I only inked Happy Birthday. As for why I wanted it shorter than the grid, I have no really good reason other than then there would be four rows all the same, and four isn't odd. I like ODD. This way, three identically sized rows and one short row keeps the card oddly balanced. That's my theory, anyway.

About the photo: You can see the play of light through the sheers on this card, but at least it doesn't look blue on my monitor. Except where it IS blue, of course. The white is a bit gray, but when I brightened the highlights too much, the blue and orange glowed nuclear. It was a no-win situation, so I went with something in-between.

Email ThisBlogThis!Share to TwitterShare to FacebookShare to Pinterest
Labels: For Birthday, Stamps by Papertrey