One of my favorite cards ever has just three rectangles of different shades of blue cardstock on a white card base. On the bottom rectangle, I stamped, "Feeling blue?"

As I was contemplating guy birthday cards, I went looking through my scrapbooking paper (not coordinated with inks) and found a stack of 6x6 square metallic, shimmery cardstock I bought in a sample pack on sale from Marco's. I'd done a few things with it, but basically, metallic cardstock baffles me. Everything I make with it looks artificial and forced, if that makes sense.

As soon as I saw the bronze, gold, and copper cardstocks laid out together, I thought, "DUDE!" Here's the first card I made. 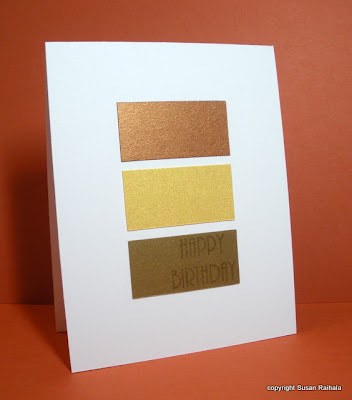 It has issues. The bars are a bit too narrow. The stamped sentiment is a bit too hard to see. The base should be cream rather than white. But the overall effect screams sophisticated guy, don't you think? And isn't that art deco sentiment da bomb? It's from an old My Sentiments Exactly set that has more cutsy images for birthdays that I don't like. But the sentiments are really good!

So I played with the idea and borrowed (again) this sketch from wiggydl (aka Donelda), changing the base to PTI vintage cream and stamping the sentiment in Brilliance Galaxy Gold to match the gold square. 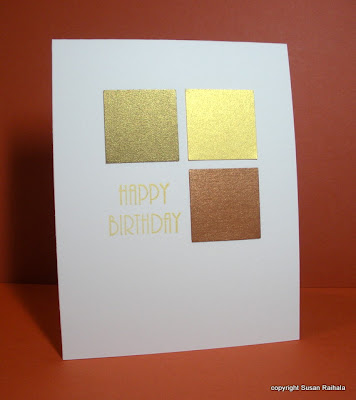 Yes! And then I went with larger rectangles and stamping the sentiment on the cream background above them in a copper Colorbox Pigment ink to match the bottom block. 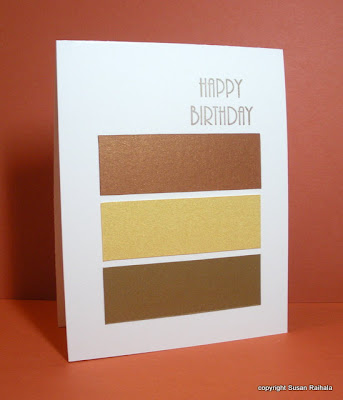 Sigh. I ran out of gold cardstock after making 5 cards. But what an easy and sophisticated way to let the shimmery cardstock speak for itself.

Thanks to everyone who made suggestions for stamp sets for kids. I have some promising leads and will make a decision soon. Don't you just love getting cash for Christmas? Yeah....

Posted by Susan Raihala at 5:34 AM