I hope you all had a very merry Christmas...other than a non-functional Wii, ours was magical!

Today's card shows how abstract images like this swirly backgound can be cut into pieces and make a wonderful focal point. (Cutting up images of people or animals is dicier...no pun intended. Mostly, though not always, it just looks weird.)

Cut and popped, these swirls gain visual interest, even if the act of cutting them really has little to do with the image or the sentiment. Using red on white heightens the visual interest and also provides a link between the image and the theme of the sentiment, which ultimately unifies this card for me. 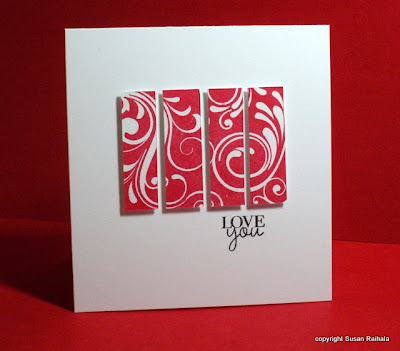 I made this card on a standard size card for an A2 envelope, but had to trim the bottom off to balance it...there was just too much white space on the bottom; I think because the image itself is heavy, it needed less space below it to ground it. I'm not even sure what the final measure was...I just kept trimming a bit until it balanced better. Next time I do this, I'll try to get before and after shots to show why I sometimes chop bottoms off cards.

Off to brave the crowds at Best Buy to exchange the non-functional Wii that totally disappointed my children yesterday. Sigh. Wish me luck.
Posted by Susan Raihala at 7:16 AM

Email ThisBlogThis!Share to TwitterShare to FacebookShare to Pinterest
Labels: Stamps by Hero Arts