Here's part 3 of my OLW30 entries. Seriously, I am lovin' this challenge and it's really putting a dent in my need for Christmas cards, LOL!

Here's the inspiration card from Vigo's website that I used. Actually there are several cards with this gray/white with a touch of red color scheme that really appealed to me.

Of course, I had to make sure there was plenty of white on my versions. This card and the third combine Through the Trees and Silent Night, both sets from Papertrey Ink. I rounded the corners with scallop scissors. 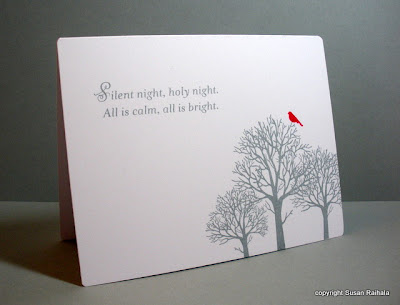 This card mimics the shape of the original inspiration piece. The sentiment is from Signature Christmas, which, for some tragic reason, I had forgotten about in the last few months. It's an awesome set that I used on most of my Christmas cards last year. I added the extra bird on this one to bring together the two sides of the card. 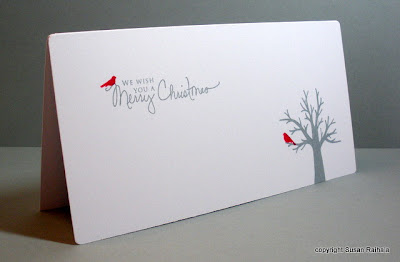 This third card uses a visual triangle of red (which another gray with red card on the inspiration page had). 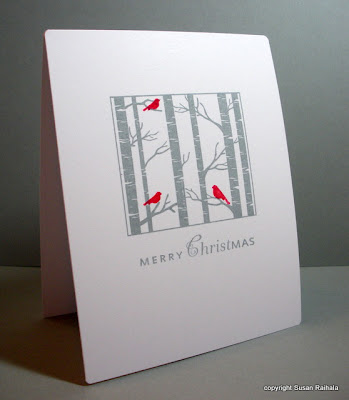 ﻿
This color scheme is so pretty and incredibly flexible. I'm going to experiment further with it. It just looks so clean, and even my darling husband, who pretty much ignores what I do with paper, said he really likes all three of these. Cool, eh?
Posted by Susan Raihala at 6:03 PM

Email ThisBlogThis!Share to TwitterShare to FacebookShare to Pinterest
Labels: For Christmas, One-Layer Wednesdays