Weeks ago, I went shopping at a papercraft store, and after looking around for over an hour, ended up buying a single set of stamps (plus a few other odds and ends). The stamp set was the Hero Arts speech bubble clear set.

When I tried to use it, I realized I have a shocking lack of stamps of images that might legitimately have something to say in a speech bubble. After digging a bit, I found two old, discontinued stamps from Hero Arts--a kitty and a dog--that are obscenely adorable. So I made these two cards. 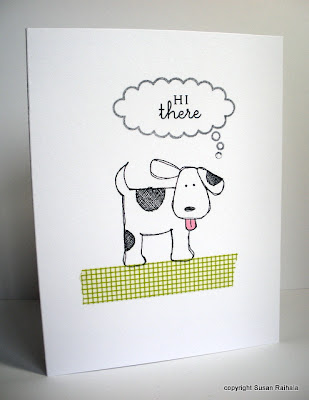 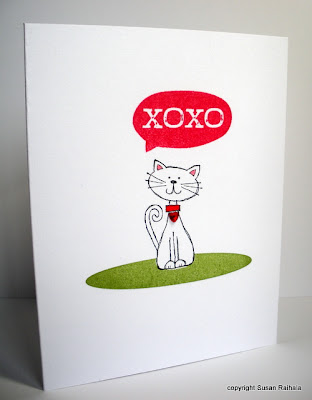 The dog, named Newton, and the kitty, named, um, Kitty, need ground to stand on, so I gave Newton a piece of my last remaining washi tape (I gave the rest away because I'm washi-challenged), and Kitty got the large AMuse oval to stand on.

They're cute, but I feel creatively tapped out with speech bubbles. And now I'm feeling stupid for buying the speech bubble set in the first place. They seemed like such a great idea in the store, but now I suspect I fell victim to some trend or another, subliminally controlled by marketing forces I don't care to look at too closely.

Or maybe I just need to buy some more images of critters who might have something to say.

Oh, and by the way, we're not even going to talk about the punch I bought that I already had. No, no, no, I did not do that. Never, not ever, no way, not in this lifetime, ever.

De Nile is a river that runs both deep and wide.

Posted by Susan Raihala at 4:58 PM