Here's the card I almost posted on Valentine's Day but didn't because it was pink and not exactly a Valentine. Pretty, though, don't you think? 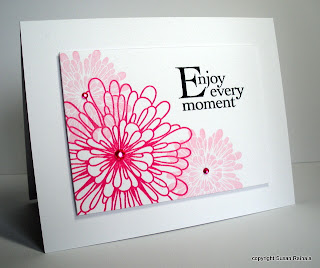 I actually made quite a few Valentine's Day cards but hadn't photographed them in time to post, which is too bad because some of them are really cute! Now, if I post them, it will feel awkward, like showing up to a costume party on the wrong night, all dressed up like a Smurf (or maybe the Doppler effect) and feeling like a fool.

One of the reader comments on my non-Valentine's Day card on Valentine's Day brought up an interesting topic I've discussed before...the trend toward using non-traditional colors on holiday cards. So Valentines are, say, purple or blue or brown or yellow rather than pink, red, and chocolate brown. Or Christmas cards are teal and orange rather than green and red. The reader complained about this trend, and she has a valid point, in my humble opinion.

I play with color a lot, mainly because it's fun. Also, I make so many Christmas cards (at least a couple hundred each year) that limiting myself to a traditional palette for them all is mind-numbingly boring, so yes, I did, indeed, make a teal-and-orange nativity card last year. Just one, to get it out of my system.

The point behind the rules is that when we break them, it's for a good reason because the rules aren't exactly arbitrary. They have their own very good reasons for being. I mostly follow them and break them only when I feel I must.

Of course, this is a hobby, so do what you want...make all-black Christmas cards for all I care if  it makes you happy. You don't have to listen to me.

Even if I am right.

Ooops. Was that my outside voice?

Now, who wants to take on the challenge of an all-black Christmas card?

Posted by Susan Raihala at 4:26 PM