Okay. I swear I was on the math team in junior high and high school, back in the day when we weren't allowed to use calculators. I even took calculus during my senior year in high school. Calculus, people!

But when I read a challenge in Paper Crafts' Stamp It Card Challenge magazine to stamp one image seven times, this was the first card I made: 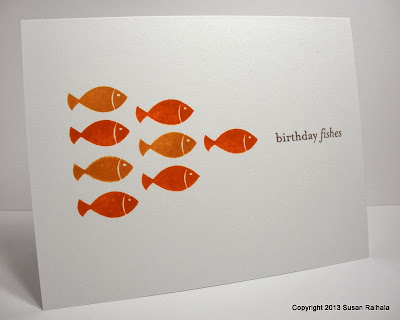 And I felt stupid.

Of course, when I was in high school and suffering a serious case of obsessive-compulsive perfectionism, I would NEVER have shared such a bone-headed mistake with ANYONE. I took stuff like this far too seriously back then.

Now, two days before I turn 47, it seems perfectly entertaining to share it with the entire interwebs.

Because if there's one thing that I've learned in just-shy-of-47 years, it's that we ALL make mistakes, and it's far better to laugh about them than to be embarrassed or ashamed. Besides, it's a fun card and whoever gets it will have no idea that it has the "wrong" number of fish on it.

And by the way, all that calculus leaked out of my head while I was in graduate school reading Ulysses and Beowulf and everything Chaucer ever wrote. These days, I wouldn't know a differential equation if it bit me on the tushy. But ask me about stream of consciousness, the importance of litotes in Anglo-Saxon verse, and how we know Chaucer wasn't anti-Semitic sometime.

That stuff's never going to go away.

Which goes to show absolutely nothing of value except we can remember the most useless information if we find it fascinating enough.

Can you tell it's been a weird day?

Early birthday fishes to me!

Posted by Susan Raihala at 9:42 PM