Two More OLS15 Card, and a Design Analysis of Unity

I made a couple more cards for the OLS15 Challenge: Blowin' in the Wind using the Breathe set from CASual Friday. They provide a study in contrasts, so I'm sharing them both tonight.

First up, a very organic design, loose and breezy, if you will. 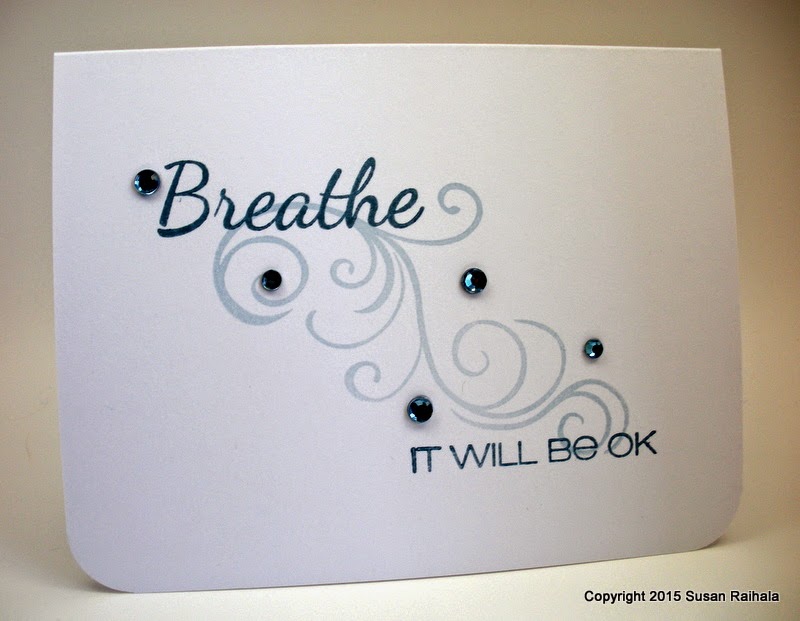 The flourish is from Clearly Besotted's With a Flourish. The bottom corners are rounded to soften the shape of the card, and the bling is there because it's pretty.

Anyway, using the same stamps and ink, I made a second card that feels totally different. I didn't shoot it, but the "It will be ok" sentiment is on the inside of this card. 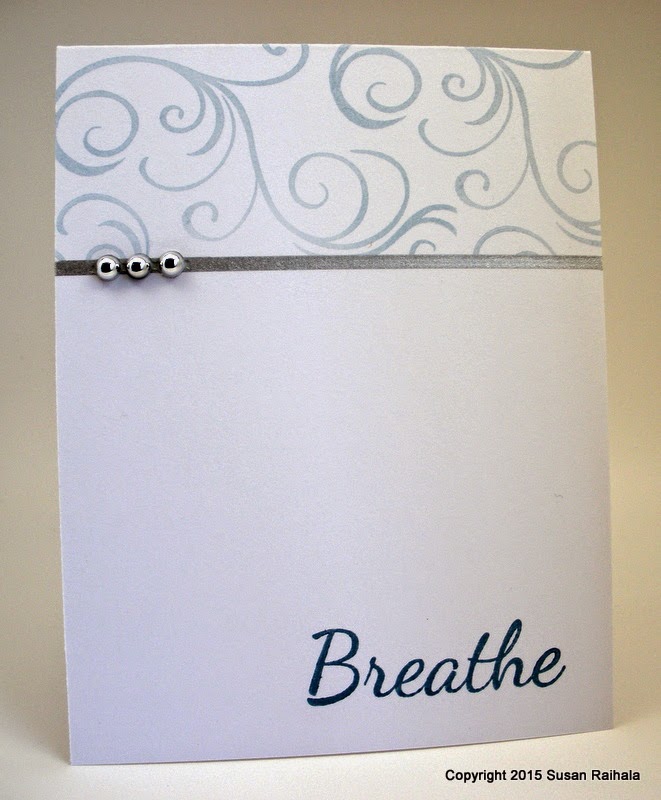 The flourish is repeated in a border across the top, limited by a silver metallic line. The three bead accents balance the sentiment.

While I prefer the look of the second card (so tidy!), it's just not as successful a design with the sentiment. Notice that in the first card, the flourish mimics the idea of the sentiment...a breath visualized by swirls. If you wanted to get really funky about it, you could say the rhinestones represent the moisture droplets of the breath, but only if you're writing a paper for an English class.

The second card, however, restricts the breaths represented by the flourish. They are tightly limited to the top of the card, held back or inside or something. They are also a little chaotic and randomly repeated, but the color contrasts with the idea of chaos...that blue is so serene. And the silver beads...what do they have to do with the idea of breathing? Especially all bunched together like that? You might, I suppose, think of the trapped gray-blue breaths as the condition that necessitates sending a card telling someone to breath. But really, then the tone of the card becomes rather bossy, don't you think? Like it's saying, "Hey! Look at you, all constipated in the lungs.... Let it out, why don't ya!"

There's a super-easy fix for this lack of unity. Change the sentiment. Because that second card is otherwise quite a lovely, classic design. For instance, drop one of the silver beads, add a congratulations sentiment, and you'd have a lovely wedding card!

Don't forget as you're designing cards that the elements of the card need to relate well to one another. It all needs to make sense.

And thus endeth the lesson. Go forth and play along with the OLS15 Challenge!