Finally Getting Cute...and Precisely Grounded at the Same Time

Clearly Besotted is quickly becoming one of my favorite lines of stamps. For years, I've mostly eschewed cute stamps. Oh, I've tried the occasional cute set, but rarely did the resulting cards make me happy.

But like I said, Clearly Besotted is changing my mind. Check out this adorable fox from the Woodland Pals set. 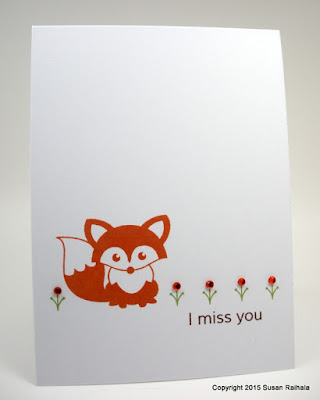 Dang, this little fox is adorable...and just the right size! The set (if you're too lazy to click the link) contains five cute animals, a branch, and a mushroom, as well as a few punny sentiments.

One thing about these little animals: they need a ground to stand on. It won't do to have them floating around the card. As I used each one, I played around with different ways to visually "ground" each critter, and I'll share them over the next few days.

This little fox provided a wonderful opportunity to try something a bit different. Rather than use a standard ground stamp, I created the illusion of ground by repeatedly stamping a little stem from Papertrey's Modern Basics set and making a very precise line with it. Even though, technically, this fox is floating, the precise line of flowers creates the illusion of grounding...and preserves the light, airy feel of the card. 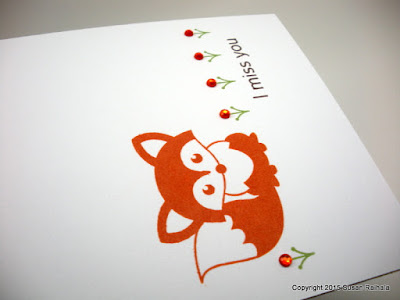 Aligning everything was simple using a gridded acrylic block. You might notice that the card looks slightly narrower than 4.25 inches. That's because the flowers are spaced in such a way that it created an uneven edge on the card...so I shaved the left side a bit so the row of flowers is centered on the card.

Cutting a bit off the edge is much easier than trying to work out the math of getting everything centered, don't you think?

Now, please forgive me while I get personal. Y'all, I'm not very grounded myself right now...I'm on cloud 9! Yesterday, we found out that Jack didn't get picked to be in the 6th grade talent show. We were so bummed, but then I got a call from the principal, who had heard that Jack's aide, Mrs. Mitchell, had cried when she heard the bad news. Lots of the special education folks were upset, actually. So the principal called and explained that the committee who picked the acts for the show had been worried that kids who didn't know Jack might be unkind if his trumpet squeaked. But since he'd heard how hard Jack had worked to get ready for the auditions, he wanted Jack's hard work to be rewarded! Yay!!!

The committee need not have worried. Not only did Jack do well, he got a standing ovation from about half his pod. (The 500 sixth graders are divided into three pods.) Kids in other pods who knew Jack were on their feet, too. It was awesome!!!


I'm one proud mamma! He put himself out there and did his best!!! Love this kid soooo much!!