Making Inspiration Your Own

Many stampers seem to struggle with inspiration challenges. The difficulty seems to be converting the inspiration piece into a card that is both "your own" and true to the inspiration. Certainly, when we're submitting work to formal challenges with rules, we need to make sure we fulfill all the requirements of the challenge (such as keeping cards to one layer for the One-Layer Simplicity Challenge!). Sometimes, we become anxious about following rules, and inspiration has a hard time taking off.

But to grow more comfortable with inspiration, why don't you come up with your own personal challenges?

It's fun! I promise!

For instance, as I perused the newest issue of Take Ten, I noticed a number of cards using text as a background with images and embellishments layered over the text. These cards were not, ahem, clean and simple. In fact, they were collage/shabby chic/artsy/distressed cards. But after seeing the idea for the tenth time, I decided to try to adapt it to my CAS style.

This idea of stamping over text isn't new, nor is it the first time I've tried it. (You can see one of my older posts with the idea here.) But novelty isn't the point. Inspiration can come when a cool idea grabs your attention, and you focus on it for a bit of playing around and experimenting. So don't overthink your source of inspiration. Go with whatever catches your attention, and then play with it.

Here are two of the results of my inspiration from all those cards in Take Ten: 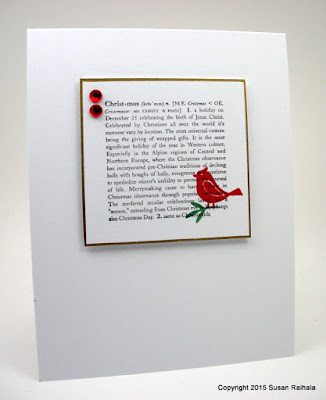 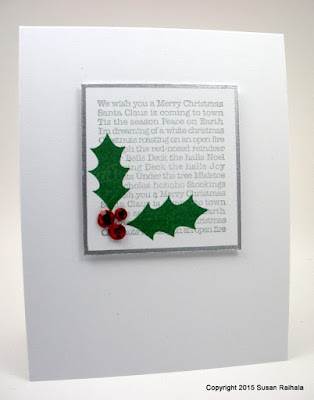 Here's my thought process. The basic idea--stamping over text--in the inspiration pieces involved turning the text into a definite background. The content of the text almost didn't seem to matter on most of the cards...random pages torn from old books with gesso or paint or ink artfully smeared on them did the trick. The focal point was the stamped image, often in black, laid over the distressed/painted text background. Not much about the designs invited you to read the text.

I, on the other hand, have five really cool Christmas-themed text stamps. Four are Christmas definitions (frankincense, gold, myrrh, and Christmas) and one is a list of Christmas phrases and song titles. In using them, I wanted most of the text to be readable...not covered up. I wanted the text to be a critical part of the card's message...not just an interesting background.

This makes sense because in CAS design, every single element has to create focus and purpose beyond mere embellishment. I've defined minimalist CAS style as using the fewest possible elements to convey a card's message in a visually interesting way. In collage, however, abundance of texture, line, and form might matter more than meaning or message. That's not to say meaning isn't important in collage--it certainly is!--but you have more stuff to work with. When striving for minimalism, you have to squeeze the max out of every little component so you can have more white space!

So in my adaptation of the inspiration idea, I found smaller stamps to act as frames or accents for the text and placed them on the edges, leaving most of the text visible.

In the first card, spots of red mark the beginning and ending of the definition of Christmas. I first added the cardinal and branch, both from a Hero Arts set, but it didn't seem quite balanced, so I added the bling. The panel is outlined in gold metallic ink to help it stand out from the card base, to give it more definition. Without the gold, the wide white border around the text looked lost.

The holly card, on the other hand, is purposefully asymmetrical. The holly leaves are much larger than the cardinal: so much so that they really are the focal point of the card...especially after I added the large red rhinestones!!! So the text is intentionally lighter than on the cardinal card. It doesn't compete with the holly so much as give it "something" to frame. And that something relates thematically to the holly, reinforcing the whole Christmas idea without needing to add a "Merry Christmas" sentiment. The silver border serves the same purpose as on the cardinal card.

Since I'm describing my thought process after the fact, you're not hearing about the mis-steps and mistakes. The results make me sound waaaay smarter, more confident, and more talented than I am. Truth is, I felt my way to these completed designs, and along the way a couple of efforts ended up in the trash because they were appallingly bad.

BUT THAT'S OKAY!!! Out of that play and learning, I got two lovely Christmas cards to send to word-loving friends.

But even more important than that...I had fun.

Which is what this hobby should be all about anyway.

Posted by Susan Raihala at 3:29 PM